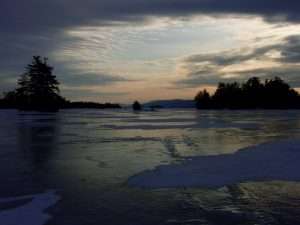 The unseasonably mild conditions we have been experiencing this winter has been unusual, but is not unprecedented. In the past, there have been numerous bouts of warm weather and limited snowfalls that have produced similar periods when the ground became bare and the temperatures frequently rose above freezing.
People who lived in the Adirondacks in 1980 might recall that snow had to be trucked onto the Nordic ski trails for the Olympic Games because of a near total absence of snow during that January. And in February of 1981, the December and January snowpack completely melted, and the ground started to thaw because of a month long period of record-breaking mild weather.

Most of the invertebrates that populate the Northern New York climatic zone are well suited to deal with such intense thaws by experiencing a type of dormancy known as diapause.

In summer, when temperatures are ideal and there is an abundance of food, the countless species of bugs that exist in our northern region continually eat and then reproduce by the hundreds if not by the thousands. But as environmental conditions begin to deteriorate, most species prepare for that time when their sources of food eventually vanish and when temperatures cause the transition of water into ice.

For many insects, winter is passed in a protected location either as an egg, or in the pupa stage of their life cycle. During this inactive state, overall life processes are significantly reduced as new body tissues slowly develop. For many other bugs, winter is spent as a larvae, nymph or adult in a sheltered spot where there is some protection from the weather and those predators that remain active during this bleak time of year. For these invertebrates, life slows to a near stop, which allows for their survival on the limited reserves of stored food within their small body.

As a bug enters this dormant state of diapause, its delicate chemical balance changes to allow the moisture within its cells to remain as a liquid regardless of how cold its surrounds becomes. Also, its internal clock is set to awaken the organism at some preprogrammed time in spring, rather than simply when weather conditions become favorable.

Photoperiodism, or a response to the decreasing amount of daylight, is the primary trigger that brings about the onset of diapause. For this reason, the vast numbers of various bugs disappear at certain times in summer, or early autumn, regardless of how warm the weather continues to be, and they remain absent from the landscape until a specific time in spring.

Even though few, if any of their natural enemies may be present during a mid-winter thaw, food sources are seldom present, which would make a period of activity at this time of year a waste of energy for them. Also, while the weather may be quite pleasant for a day or two, the temperatures can quickly plunge following the passage of a strong cold front. This would suddenly engulf any primitive, cold-blooded organism in a frigid air mass, eventually leading to its death.

If a bug entered a traditional state of torpor (dormancy regulated by weather conditions), it would tend to remain active well into the autumn just as long as temperatures stay mild, and it would end whenever unseasonably warm conditions developed during a major winter thaw. While most bugs use diapause to maintain their winterized body state until spring arrives, some insects do not.

During thaws, it is not uncommon to see a few small moths flitting around a light during the evening, or note a mosquito or fly buzzing around an outdoor wood shed or garage. These insects have evolved a state of winter dormancy that can take advantage of such mild periods in winter to carry out small segments of their life cycle when predators are totally absent.

Many people maintain that the best time to hike is during periods of unseasonably mild weather in the latter part of autumn, or in early spring before the bugs emerge. Even snowshoeing or skiing when the temperatures rise into the low to mid 40s can be great if the sun is out and the winds are calm as there are never any insects to pester you.

This is because the internal clock, regulated by diapause in the bodies of our abundant hordes of insects is indicating to them that it is still winter, and hatching from an egg or pupa casing, or emerging from a larval or nymph retreat is not allowed yet. These creatures have to wait until the more official start of the warm weather season months from now before they can return to an active existence.