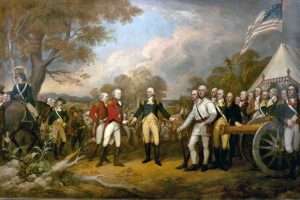 The cocktail reception will take place on Friday evening at 6:30 pm, and is open to all speakers and attendees.

The bus tour “18th Century Siege Warfare at Yorktown with Dr. Glenn Williams,” will take place on Friday from 8 am to 4:30 pm.

This guided tour of the Yorktown battlefield that will examine eighteenth century field fortification construction, employment of artillery weapons and ordnance, and the application of siege warfare doctrine. Explore the British defensive positions and the Franco-American coalition army’s parallel and approach trenches as well as the logistical support areas that ensured the stunning victory. Siege warfare can be seen as dynamic and as interesting as any battlefield fighting.

At the tour’s conclusion, participants will better understand how the combined allied forces were able to destroy the combat power of a major British field army that was defending well-fortified positions without resorting to bloody frontal assaults.

Although it did not mark the complete end of hostilities, the siege of Yorktown proved to be the decisive campaign and last major engagement of our War for Independence.

Tour leader Glenn Williams is a former army officer and retired from the U.S. Army Center of Military History. He is the author of Year of the Hangman: George Washington’s Campaign against the Iroquois. He also wrote USS Constellation: a Short History of the Last All-Sail Warship Built by the U.S. Navy. His latest book, Dunmore’s War: Last Conflict of the Colonial Era was published by Westholme. He is currently working on a biography of “Light Horse” Harry Lee with Ed Lengel.

For more information or to register, visit the America’s History LLC website.