On the other hand, Buffalo teams experienced numerous close calls and blown calls. As well, there have been injuries and deaths, nefarious back-office dealings, and just-plain-weird happenings, each at just the wrong time to deprive city teams from winning championships. Just bad luck? Or is there something more sinister at play, like a Buffalo Sports Curse? Greg D. Tranter’s new book from RIT Press, The Buffalo Sports Curse: 120 Years of Pain, Disappointment, Heartbreak and Eternal Optimism, chronicles thirty-two cursed events. 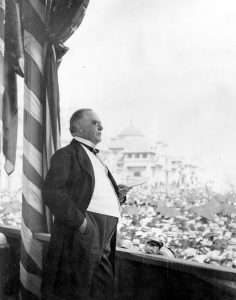 The Curse can be traced all the way back to 1901 with the assassination of President William F. McKinley at the Pan American Exposition in Buffalo. The same year, at the dawn of a new baseball league, the Queen City lost its chance for an American League Baseball franchise.

At the last minute, league President Ban Johnson moved the franchise to Boston. The team became the Boston Americans, won the first World Series in 1903, and was renamed the Boston Red Sox in 1907. Buffalo never had a Major League baseball team to call is own, though it has been on the verge at least three times.

In hockey, the Sabres advanced to Game Seven of the NHL Conference Finals in 2006. They were winning the decisive game 2-1 entering the final period. But then the Curse struck: Carolina tied the game and Sabre defenseman Brian Campbell inadvertently shot the puck over the glass and a delay of game penalty was assessed. The Hurricanes scored the series winning goal during the penalty. Carolina went on to win the Stanley Cup.

Buffalo had an inaugural franchise in the American Professional Football Association in 1920 (renamed the National Football League in 1922) and won the league championship in 1921. Or so it thought.

After finishing the regular season with an 8-0-2 record and the championship, they agreed to play two additional “exhibition” games and won one and lost the second to the Chicago Staleys, 10-7. Following the Buffalo loss, Staleys coach and owner George Halas claimed that Chicago should be league champions because their overall 9-1-1 record was better than the All-Americans 9-1-2 record, when the additional games were included.

Halas lobbied the league and ultimately the Staleys were awarded the championship following an owners’ meeting in spring 1922. It became known as the “Staley Swindle.” Buffalo owner Frank J. McNeill fought the decision for the remainder of his life (1961), as did his wife for the rest of hers, all to no avail. 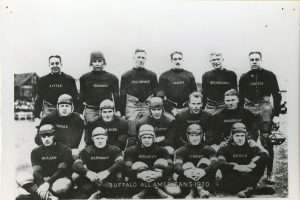 The Buffalo Braves, an NBA franchise from 1970 to 1978, was building toward a potential championship, having lost playoff series in three consecutive seasons: 1974-1976. Two series against the Boston Celtics ended in controversy: the Braves went home while the Celtics went on to NBA championships.

Owner Paul Snyder sold the team to John Y. Brown, of Kentucky Fried Chicken fame. In order to break the lease with Memorial Auditorium and move the franchise, Brown dismantled the team, successfully driving down attendance. The NBA has not returned to the Queen City.

Tranter describes 120 years of Buffalo sports history and colorfully details thirty-two cursed events, including “Wide Right,” “No Goal,” and “Home Run Throwback.” He vividly reports the highs and lows that teams and individuals took, only to be undermined by cursed moments leaving Buffalo fans dismayed and a Curse too pronounced to ignore. And if Buffalo ever wants to eliminate “The Curse” it has to acknowledge that a Curse exists, before it can break it!

Greg Tranter is a prominent, award-winning Buffalo sports historian, curator, and collector. He has written two books, Makers, Moments & Memorabilia: A Chronicle of Buffalo Professional Sports (2019) and RELICS: The History of the Buffalo Bills in Objects and Memorabilia (2021), and numerous articles on Buffalo sports history for publications such as The Buffalo News and Western New York Heritage magazine.