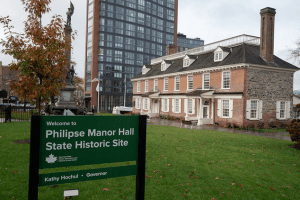 The Philipse Manor Hall State Historic Site in Yonkers, Westchester County, has reopened after a $20 million renovation of the building and grounds, as well as the design of new exhibits.

These new exhibits advance a recent Office of Parks, Recreation and Historic Preservation initiative to ensure that the state’s historic sites embrace stories that reflect the diversity of the state and nation’s history.

Philipse Manor Hall is a National Historic Landmark and a Yonkers City Landmark; a status that informed State Parks’ approach to the rehabilitation of the site. In addition to the architectural restoration of the Hall, the grounds and building have been updated to improve accessibility, which includes a newly constructed, discreet rear addition that houses new bathrooms and an elevator.

The new exhibits have been designed to meet the needs of multilingual speakers, the hearing and visually impaired, visitors with wheelchairs and walkers, and is sensitive to visitors of all ages, abilities, and cultural experiences. Prior to its reopening, Philipse Manor Hall received approximately 15,000 visitors a year, and renovations are expected to double the amount of visitors to approximately 30,000 a year.

The exhibits are additionally offered virtually for those who are not able to visit the site in person.

The new exhibits incorporate the journeys of the Philipse family, the indigenous people from whom the Philipse lands derive, and enslaved Africans, whose work and trade allowed the Philipse family to prosper during the pre-Revolutionary era. While past exhibits and lectures have documented the role that Africans and indigenous people contributed to New York State history, these expanded permanent exhibits more fully depict and share this complex history with visitors.

The exhibits include a variety of interactive elements including augmented reality experiences, touch, sound – including the languages heard in the colonial period, Munsee, Dutch and KiKongo – and smell elements in support of diverse learning experiences.

In addition, New York State is partnering with the Municipal Housing Authority of Yonkers (MHACY) and Yonkers Arts to curate an exhibition about the late rapper and actor Earl Simmons, the also known as DMX. The exhibition, “Look Thru My Eyes: a DMX Story,” will open later this year. The exhibition is co-curated by Ray Wilcox of Yonkers Arts with curation and creative support from Raissa Fitzgerald and Wilson Kimball of MHACY.

New York State’s ownership of the site was established through benefactor Eva Smith Cochran, who entrusted the state to preserve the site in perpetuity for the benefit and education of New Yorkers. Prior to this, the site served as the Village of Yonkers and subsequently, City of Yonkers City Hall. The new exhibits additionally explore these eras of transition and the gift from Cochran to the City, as well as the transfer to the state for the site’s preservation and interpretation for the benefit of all New Yorkers and visitors.

The New York State Office of Parks, Recreation and Historic Preservation oversees more than 250 parks, historic sites, recreational trails, golf courses, boat launches and more, which are visited by 78 million people annually. For more information on any of these recreation areas, click here.