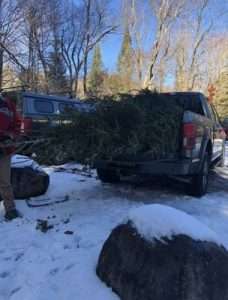 New York State Forest Ranger McCartney reported that on Saturday, November 26 at about 1:00 pm, he was checking the trail register at Moss Lake in the town of Webb, Herkimer County, in the Adirondack Park when he heard someone approaching him on the trail.

The Ranger said he observed a man dragging a freshly cut spruce tree and carrying a saw toward a pickup truck in the parking lot.

Once the man loaded the tree into his truck, Ranger McCartney said he interviewed the 58-year-old from Old Forge and educated him about regulations prohibiting the cutting of trees by the public on State land, regardless of its potential use in holiday celebrations.

The man was then issued an appearance ticket.