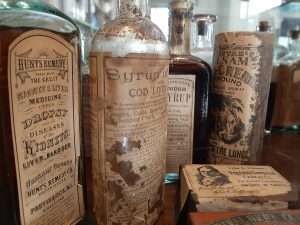 In the June 1841 the Albany Evening Journal ran the following notice:

“Dr. Cooke, No. 3 Norton Street, Albany, NY — In every age of the world, men of superior genius have lived: Homer, Voltaire, Euripides and Virgil. It has, however, remained for the 19th century to produce a man whose attainments, both in letters and science, which justly entitles him to equal rank with the illustrious mentioned above. That man is the world-renowned surgeon and physician, Gen. George Cooke whose fame and knowledge of the healing art have reached every clime.

“Having traveled and practiced on both hemispheres, strange as it may appear, it is, nevertheless true that Dr. Cooke often effects cures in one day, permanently, with the aid of his Universal Antidote, annihilating every vestige of the disease of whatever character, for which a complimentary massive gold medal was presented to him by the British government in consideration of his superior talents, and his scientific improvements in the practice of medicine. Let the public bear in mind that old Dr. Cooke is in no manner connected with the rapacious gang of swindlers whose letters have so recently been seized by the US Government.

“Happy, twice happy are they who direct their steps to the oldest private office, the longest-lifed medical dispensary in the Union, at 3 Norton Street, established under the special patronage of the people, and the sole maintenance of an honorable physician who has practiced the healing art for nearly a half-century.”

Another newspaper ad from the period claimed:

“Professor Cooke, MD. DD. LL D. being regularly educated, and having had great experience for more than thirty years in extensive hospitals and in private practice, has frequently performed cures where others have failed, even those expelled from the almshouse and county poor houses of various states as incurable…. though a regular and legally qualified practitioner of physic and surgery, is not a member of the Albany County Medical Society, and never will be, — for this plain reason — no member of that body, ‘from alpha to omega’ has ever had the honor of having been initiated, passed raised: neither exalted with all the maximum collegiate degrees in the arts and sciences, medicine, divinity and law; nor are any of them happily and universally distinguished as ‘chancellor of a university, ‘the most eminent of all modern physicians,’ ‘the patriarch of the medical profession.’ The office of Professor Cooke is, as usual, at No. 3 Norton Street. His residence is at Arbor Hill Villa, No. 77 First Street, Albany, NY and remember, the Albany Lock Hospital is an institution not associated with any similar establishment in the United States.” 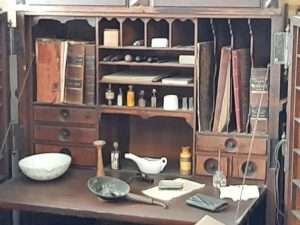 George Cooke (1788-1873) came along at a time when little was known about diseases and even the best and most professionally trained doctors sometimes did things that caused more harm than good. Since no one knew what was right, it was hard to prove anyone wrong. Then, as today, many ailments were vague and some more mental than physical. Every practitioner had patients who praised their product (although in reviewing period ads, Dr. Cooke seems to have been well over the top).

Other ads from Dr. Cooke proclaimed that he had “effectually cured debility stemming from bacchanalian indulgences, long warm climates or vices too often pursued which if not treated terminate in incontinence and consumption.” Dr. Cooke could treat any cause from which “the constitution becomes enfeebled.”

Competitors of Dr. Cooke sprang up and ads for “No Cure—No Pay! – Old Galen’s Locke Dispensary, Established for the removal and prevention of the Venereal Disease without Mercury!” run by Dr. Lockrow at 56 Beaver St., Albany, appeared. Collins’ Voltaic Plasters for Lame Back and Rheumatism, Sanford’s Radical Cure for Catarrh, Wingate’s Worm Powders, Cavenderwort Candy to Cure the Common Cold, Dr. Taylor’s Balsamic Liniment for treating Consumption and Sherman’s Medicines for the “Loins, Sides, Breast, &c., especially good for the Treatment of Lumbago” all appeared.

Also, “To the Afflicted Public—It is considered of great importance for the Public to know the following facts: About four years ago, Solomon Hays, the person to whom the celebrated Dr. Gridley had, on his death bed, imparted the secret of making a Liniment to cure the piles, authorized it to be put up and sold under the name of HAYS’ LINIMENT.” The ad goes on to say that if, after using the entire bottle the patient has not been cured, they could return the empty bottle for a full refund. “Upwards of fifty thousand bottles have been sold, out of which not ten have been returned and those only because the person did not use it properly.”

Along with these ads were front-page ads for piano lessons, law books, plumbing supplies, muslin, buttons and ribbon, paint, bricks, and other sundry articles.