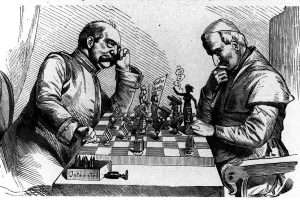 Organized a generation before German unification, the ports of Bremen and Hamburg were semi-independent city states. With a rapid installation of modern facilities, their main stream of revenue became migration. These cities out-rivaled Le Havre, Liverpool, Antwerp and Rotterdam in an increasingly competitive market. By the mid-nineteenth century steamship lines began providing faster and more affordable “services” to migrants.

In spite of improvements, passengers experienced cramped conditions when traveling on migrant ships. All of them were required to provide sufficient clothing and bedding for the voyage. Even cabin class passengers had to outfit their own berths. Handbooks of “good advice” were published to help passengers prepare for the crossing and provide information about the choice of ship, the best time to sail, and give tips on fitting up of a berth. In spite of all that, the transatlantic trek remained a hazardous undertaking.

Fire was a continuous risk. In September 1858, an estimated five hundred migrants died after a blaze on SS Austria on its way from Hamburg to the city of New York. Disease on the long sea voyage was rife and countless passengers died of cholera or typhus on board ship. The ominous spectre of disaster haunted travelers on their seemingly endless journey.

Initially, German vessels were constructed in British shipyards, but by the mid-1890s – helped by Germany’s rapid industrial and technological expansion – companies had started placing orders with local steamship builders. These shipping lines would take the main share in the transportation of two transatlantic flows of mass migration.

Between 1840 and 1880, German migration to the United States was at its peak. When the number of German emigrants fell sharply in the 1890s, the New York-bound exodus from Central and Eastern Europe took over. Hamburg and Bremen were the nearest ports of embarkation for large numbers of Jewish migrants escaping persecution in the Russian Empire.

Rival companies started competing with each other to make the fastest crossing. To reach New York in record tempo became a race for glory (and customers). By the 1890s the accolade “Blue Riband of the Atlantic” had come into circulation for the ship that completed the trip with the highest average speed (the term itself was borrowed from horse racing). Cunard refused to recognize the title, fearing that pace would be put above passenger safety.

In 1871, Otto von Bismarck united a patchwork of self-standing states to form the German Empire. Soon after unification a bitter power battle erupted between the government of Prussia and the Roman Catholic Church. The Iron Chancellor faced Pope Pius IX.

Known as the “Kulturkampf ” (culture war), a series of legislative measures were passed aimed at reducing the influence of the Church in public life, most notably the Pulpit Law (December 1871) which banned members of the clergy from discussing matters of state with their flock. The School Supervision Law (March 1872) curtailed the Church’s influence in education, but more severe measures were being prepared with the intent of eliminating once and for all the “Jesuit Menace” to the new German nation.

The Jesuit Law (July 1872) dissolved the order of the Society of Jesus. Its facilities were closed down and individual members were subject to restrictions of communication and/or movement. The most severe blow to the Catholic Church came with the passing of the Monasteries Act (May 1875) which banned all religious orders from Prussian territory with the exception of those dedicated to the care of the sick and disabled.

Although many of these laws were revoked in the course of subsequent decades, their initial impact was severe. The “struggle for culture” reached both major religious centers and remote villages, as agents of the State banned or arrested priests and closed down gathering places. Protestant polemicists and progressive politicians castigated Catholics as ignorant minions of a clerical hierarchy, hampering the forward march of civil society.

The Kulturkampf triggered not only a campaign of Catholic resistance, either active or passive, but also prompted a wave of confessional migrations, often involving the displacement or repatriation of entire monastic communities. Neighboring Holland and Belgium were the closest destinations for victims driven out by the new Prussian legislation. Others decided to leave Europe altogether and seek a new life the United States.

Whereas previous generations of German migrants originated predominantly from northern territories, under Prussian rule they fled the southern Catholic states.

Rome of the West

The Congregation of Franciscan Sisters, Daughters of the Sacred Hearts of Jesus and Mary, was founded in 1860 by Mother Clara Pfänder. Three years later a Motherhouse was established in Salzkotten, a (salt producing) town in the district of Paderborn, Nordrhein-Westfalen.

Once Bismarck’s anti-Catholic agenda was set in motion, Clara was compelled to send her sisters into other countries. During that turbulent time she received a request from the Bishop of Paderborn.

In October 1871 a petition had been delivered to Father Ernst Andrew Schindler of St Boniface Catholic Church in Carondelet, a neighborhood in the in the south-eastern part of St Louis, Missouri, requesting the establishment of a local hospital that could cope with the sharp growth in the number of accidents on the railroads and in local factories. Industrialization came at a cost.

Originally populated by French-speaking immigrants before German incomers started to outnumber them, St Louis had a strong Catholic identity which was reinforced when Pope Pius IX elevated the city to an Archdiocese in July 1847. St Louis acquired the nickname “Rome of the West.”

Schindler himself originated from Westfalen. He contacted the Bishop of Paderborn, asking him for support in initiating the medical project in his city. The latter urged Mother Clara Pfänder to accept the challenge as part of her missionary work program which, at the same time, would offer her nuns a chance to escape Bismarck’s repressive regime.

In December 1872 a first group nineteen of sisters arrived from northwest Germany to be employed as nurses in Carondelet’s newly founded Saint Boniface Hospital. Three years later, five more Franciscan sisters set out on the long odyssey to Missouri to take up their duties of care. 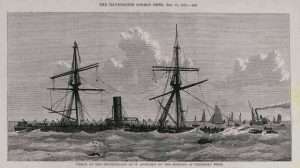 The S.S. Deutschland was an iron emigrant passenger steamship of the Norddeutscher Lloyd. Built by Caird & Company in Greenock, Scotland, she entered service on October 7, 1866, and arrived in New York three weeks later on her maiden voyage.

Once at sea, the weather conditions were getting worse by the hour. Caught in a heavy snowstorm, Captain Eduard Brickenstein and his colleagues on the bridge had no idea of ship’s position until, at 05:00 the next day, she struck the notorious Kentish Knock offshore sandbank at the entrance to the Thames Estuary, about 20 miles from the port of Harwich. 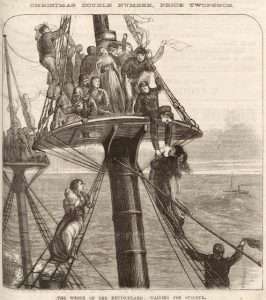 Distress rockets were fired to attract the attention of passing ships, but they went unnoticed or were (as was claimed by the Captain in the aftermath of the disaster) discarded by other vessels. The crippled ship began to take on water and as the tide rose she failed to lift off the shoal as had been hoped and expected.

As the wind rose to gale force, command was given to abandon ship. The order caused panic and confusion. One boat reached the shore with only a single survivor. The remaining boats were washed away or destroyed by the stormy seas.

More than twenty-eight hours passed before help arrived at last. The paddle tug Liverpool sailed from Harwich at daylight and rescued sixty-nine passengers and eighty-six crew members who had remained on the wreck. Some sixty people lost their lives.

To this day, the exact identities and numbers of those who perished remain uncertain due to discrepancies and inaccuracies in the passenger lists.

When disaster struck the sisters prayed with fellow passengers, giving priority to them in the rescue attempts whereby they themselves found death in the wild waters. Henrica Fassbänder’s body was never recovered.

Four dead nuns were brought to St Francis of Assisi Church on The Grove in Stratford, East London. The Funeral Mass was led by Cardinal Henry Edward Manning, Archbishop of Westminster. 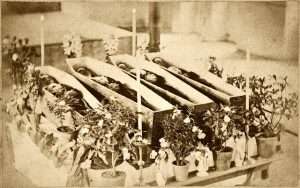 In his homily he praised the courage of the victims: “When at length a means of escape was at hand, they refused and allowed others to take their places and to save themselves.” The sisters were buried in St Patrick’s Cemetery in Leytonstone, a mile down the road.

When the widely reported news of the ship’s sinking spread around the globe, Gerard Manley Hopkins was studying for the priesthood at St Bueno’s (Jesuit) College in North Wales, having deserted the Anglican Church. By that time he had decided to stop writing poetry, burning all his poems in a self-ignited bonfire. His religious superior however urged him to dedicate a poem to commemorate the disaster and its tragic loss of life.

For the poet, there was a “personal” aspect to the devastating tale. Hopkins himself was born in Stratford and, for the first ten years of his life, he lived at 87 The Grove across the road from the Church where the funeral service had taken place.

His poem “The Wreck of the Deutschland” touched many hearts, but raised eyebrows too as it did not follow the standard form of English poetry. Incorporating details gathered from extensive press reports that followed the tragedy, Hopkins set out to present man’s struggle to see the hand of God in the midst of apparent evil. But where did this wickedness stem from?

It is a striking fact that the poet does not refer to the nuns as missionaries. Instead, he paints an image of five young women who were driven into exile and paid the ultimate price in their search for religious freedom. As Hopkins put it: “Rhine refused them: Thames would ruin them.” 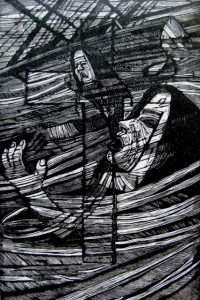 This poem is not just a lamentation for lost lives. As a literary “intervention” in Prussia’s ungodly and evil treatment of the Catholic Church, its tragic subject served the author to highlight the Jesuit case by using shipwreck as a metaphor for Bismarck’s attack on religion. Drowning migrants were used to direct attention from the sinking ship to an entirely different and essentially politico-religious narrative.

“On Saturday sailed from Bremen,
American-outward-bound,
Take settler and seamen, tell men with women,
Two hundred souls in the round …”

Gerard Manley Hopkins, The Wreck of the Deutschland (1875)