In light of The Cultural Landscape Foundation’s advocacy for Downing Park in Newburgh, NY, and the proposed reinterment at the historic designed landscape of remains from a former African American burial site, I thought I would weigh in with some thoughts of my own on the subject.

I need not go over the history of that historic landscape, other than to say that it was the product of a late collaboration of Frederick Law Olmsted, Sr., and Calvert Vaux and their respective sons, John Charles Olmsted and Downing Vaux.

Downing Park is one of the great American landscapes that the two senior men undertook to design free of charge in memory of Andrew Jackson Downing, the influential author, designer, and horticulturist and Vaux’s former partner and friend. Newspapers at the time of the park’s creation in the 1880s also reported that the park was to be a memorial to Charles Downing, Andrew’s brother, who had died recently after a long and distinguished career as an internationally known scientific horticulturist. Charles Darwin, for one, acknowledged him in his famous book The Origin of Species. 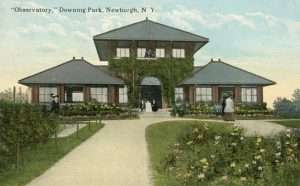 While I might question the appropriateness of the decision by the city to reinter graves from the former Newburgh Colored Burial Ground within the grounds of the park, the City Council has approved it. My concern is the location chosen for this reinterment.

It seems to me that the area designated misses the opportunity to reestablish a significant element of the original design, namely the site of the demolished Observatory (designed by Downing Vaux) that once stood on the highest point within the park and which commands a broad view of the Hudson and the Highlands. Placing the burial memorial at this location, would provide a more prominent and dignified site for the burials than the present choice.

To have the Observatory location in Downing Park associated with Newburgh’s African American community would also raise the level of significance of the reinterments to that of the original dedication to the Downing brothers. It was this view of Newburgh Bay and the Highlands that suggested the original view from the Downings’ Grand Street property that led the nineteenth-century City Council to choose this site for Downing Park.

Placing the burial memorial here would appropriate to the reinterment the scenic beauty for which the Hudson River is famous in the annals of American culture. Moreover, placing the remains here would offer the incentive to reconstruct the Observatory or a similarly appropriate structure where the city could install a permanent interpretive history of the reinterments. In this way, visitors and future generations would be aware of the significance of the site. Something similar has been done in Buffalo in Broderick Park at the end of Ferry Street where, in the 1850s, many enslaved people escaped across the Niagara River to freedom in Canada. 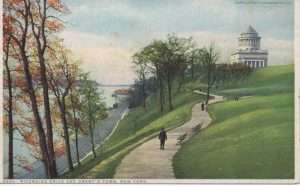 I am aware of a few burial sites within Olmsted and Vaux public parks. Most of them were already on the land when the parks were created. Brooklyn’s Fort Green Park and Buffalo’s Delaware Park (where the meadow has graves from the War of 1812) are two examples.

The one instance that stands out in my mind when a burial site was added to an existing public park is the tomb of President Ulysses S. Grant in Manhattan. When President Grant died in 1885, his widow expressed the desire to have him buried in New York City’s Central Park. At the time, Calvert Vaux was the landscape architect to the Department of Public Parks. He identified an alternative, a site in Riverside Park, that commanded a panorama of the Hudson River for the tomb and later memorial structure. Olmsted, who was living in Boston at the time, seconded Vaux’s choice.

In my opinion, the former Observatory site in Downing Park is analogous to the position that Grant’s Tomb occupies further down the river. In the words of the 2010 National Register of Historic Places nomination for the Newburgh Colored Burial Ground, a suitable memorial here could “be useful in assessing questions of status and how the larger Newburgh society viewed and treated people of color—both at the time the cemetery was in use and in subsequent periods in the city’s history.”

Francis Kowsky is SUNY Distinguished Professor Emeritus and Fellow of the Society of Architectural Historians. He is the author of Country Park and City: The Life and Architecture of Calvert Vaux and The Best Planned City in the World: Olmsted, Vaux and the Buffalo Park System.

The Cultural Landscape Foundation has included Newburgh’s Downing Park in Landslide 2022: The Olmsted Design Legacy, a report and digital exhibition about nationally significant landscape by Frederick Law Olmsted, Sr., and his successor firms that are threatened and at risk. Downing Park, which we believe is likely eligible to be a National Historic Landmark, is the only park designed by two generations of Olmsteds and Vauxs. You can read about the report here.

This article first appeared at the Cultural Landscape Foundation’s website.