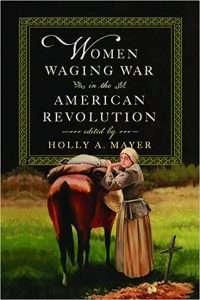 The new book Women Waging War in the American Revolution (University of Virginia Press, 2022) edited by Holly A. Mayer is a collection examining the impact of Revolutionary-era women on the outcomes of the war and its subsequent narrative tradition, from popular perception to academic treatment.

America’s War for Independence dramatically affected the speed and nature of broader social, cultural, and political changes including those shaping the place and roles of women in society. Women fought the American Revolution in many ways, in a literal no less than a figurative sense. Whether Loyalist or Patriot, Indigenous or immigrant, enslaved or slave-owning, going willingly into battle or responding when war came to their doorsteps, women participated in the conflict in complex and varied ways that reveal the critical distinctions and intersections of race, class, and allegiance that defined the era.

The contributors show how women navigated a country at war, directly affected the war’s result, and influenced the foundational historical record left in its wake. Engaging directly with that record, this volume’s authors demonstrate the ways that the Revolution transformed women’s place in America as it offered new opportunities but also imposed new limitations in the brave new world they helped create.