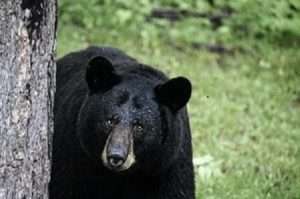 Late in the fall months, black bears are in the final stretch of hyperphagia (excessive eating) to ensure they have enough fat stored for the fast-approaching winter months. Some bears will search for food up to 20 hours a day.

In years where food sources are less abundant, bears have been known to den-up as early as late October. During especially mild winters, bears may not formally den and will remain active throughout the winter if food sources like acorns or beechnuts are available. Typically bears will begin denning starting in November and through December.

Bear dens can be as simple as a depression on the forest floor, but typically are small cavities in trees or under brush piles. In New York, bears have been known to den under residential porches or other outbuildings. Den sites are typically dry and afford protection from the elements during the long winter season.

Bears have an acute sense of smell and may attempt to consume anything they perceive as edible, including improperly stored garbage, birdseed, livestock, pet food, and barbecue grill grease traps. Once a bear has discovered a food source, it may return or seek similar foods at neighboring properties, learning bad behavior that can damage human property and may lead to the death of the bear.

Bears that frequent developed areas are more likely to be hit by vehicles, illegally killed by people who perceive them as a threat, or euthanized for dangerous behavior. New Yorkers can live responsibly with bears by taking down bird feeders, storing garbage containers and pet/livestock feed securely indoors, cleaning grill grease traps, and asking neighbors to do the same. A bear passing through a developed area in search of suitable natural habitat may investigate human food sources, but if it cannot obtain anything to eat, it will continue on its way.

If a bear is seen in an unexpected location, residents should simply be aware of the bear’s presence and observe the bear without attempting to interact with it. If left alone and given the opportunity, nearly all bears that wander into urban and suburban areas will leave as quickly and quietly as they appear, without serious conflict or need for physical removal.

You can read more about black bears in New York State here.