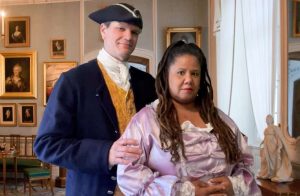 Yorktown 250 and Revolutionary Westchester 250 in collaboration with the North Castle Historical Society and Friends of Miller House / Washington’s Headquarters, Inc. will commemorate the role of Westchester County in the American Revolution with the debut of “This Man’s a Spy!,” a family friendly concert program of history through songs on Sunday, November 13th.

Inspired by the fateful encounter between two of the American Revolution’s most intriguing characters, American General Benedict Arnold and British Major John André, the lyrics tell the story of the plot to deliver West Point to the British. Had the Arnold and André plot succeeded, the British could have won the Revolutionary War.

“This Man’s a Spy!” will be performed at the Whippoorwill Theatre, North Castle Library, by Carla Lynne Hall and Jim Keyes. Carla and Keyes will introduce the André / Arnold story and its characters in an interactive discussion with the audience. The program of songs is targeted to families and appropriate for children ages 6 and over.

Carla and Keyes will be available afterwards for questions, discussion and photographs.

This program will begin at 1 pm and will take place at the Whippoorwill Theater, located 19 Whippoorwill Road in Armonk, Westchester County, NY.