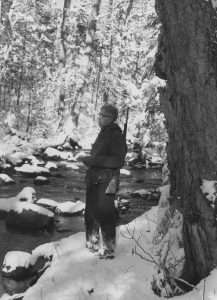 I think of Adirondack conservationist and forever wild advocate Paul Schaefer (1908-1996) during whitetail deer hunting season, actually in any season, but particularly in deer season at his Adirondack cabin. From 1921 on, over a century now, Paul Schaefer and his family, friends and hunting club comrades in the Cataract Club ventured into the wilderness from cabins in the Adirondack mountains.

Some of them stayed in deer camp during big game season, others came and remained in the area for a lifetime. Physically, Paul frequently came and went for 75 years, but his spirit lingered in the mountains and cabin country, as he called it. Friends my age and I only knew him in his final decade. I wish that I could have known him as his family, Adirondack neighbors and hunting companions knew him, in full vigor, ever alert, loping, climbing and watching through the big woods, hills and ledges of the Siamese Ponds Wilderness, searching for the “sagacious and graceful” white-tailed deer.

“This part of the wilderness is wild and precipitous. Mechanized vehicles have been left far behind. Ancient hardwoods dominate the forest. Spruce and balsam line the waters and are etched against the skyline on mountaintops. From our tent, sunsets, often of crimson and burnished gold, light the narrow valley between the mountains to the west. Some nights, the stars hang like lanterns in a black velvet sky. And on others, moonlight drenches the land and sparkles on running streams.”

“It is ideal country for the white-tailed deer and black bear, creatures of almost unbelievable sagacity and grace. They know how to take advantage of every cliff, thicket and swamp. In our country, they bed on ledges high on the north side of the mountain from where they can see extensively down the mountain through the woods .They are endowed with radar to add to their sensitive hearing. On high mountains with evergreens and swamps, they are almost impossible to get…The challenge to get a trophy buck in country as wild as this is so compelling that it brings hunters back to this remote area year after year whether they are successful or not. And the essence of an Adirondack wilderness hunting camp is much more than the success of the hunt. Rather, it is the adventure in a land untamed by man. It is experiences in a land that has been saved from vanishing, so rarely the case across the landscape of America.”

I wrote this in his memory after he died, fresh lyrics to “Summer Lightening” by songwriter Garnet Rogers.

I was headed west through the Adirondacks,
Sun was setting through the balsam fir
And a raven called from the flanks of mountains
I was feeling grand as the Saranacs.
And I thought I saw him out on a lakeshore
Looking out and reflecting in,
And I had feelings strangely akin to longing
That turned all craggy as a raven’s chin.
In Bakers Mills there lies a boulder

Brought by glaciers time out of mind
And it lies there still hiding only secrets
And like the leaf mold it gets better all the time.
And I thought I saw him rocking in his rocking chair
Looking out, reflecting on his quest
And the answers came floating across that valley fair
From the mountain he called Thunders Nest (Crane Mt)
Who scattered these diamonds in the vault of heaven
Who lifted these mountains past the dying light
Who had the courage to proclaim forever wild,
Powerful medicine, antidote to fright.