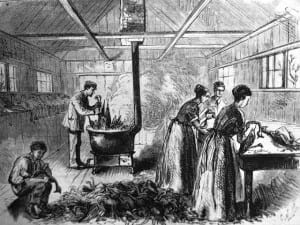 In his Thanksgiving Day proclamation, the Tammany Hall Democrat urged New Yorkers to spend time on that day to declare “their gratitude to God for all his mercies” and to “remember especially the poor.”

On October 28, President Ulysses S. Grant recommended that the nation observe Thanksgiving a week after the New York Thanksgiving, on Thursday November 30. In his proclamation, the Republican chief executive called for Americans to “make the usual acknowledgments to Almighty God for the blessings he has conferred on them” and ask “His protection and kindness for their less fortunate brethren.”

Neither Governor Hoffman nor President Grant had done anything wrong or unusual. They both were following customs established by their predecessors in office. In New York State, governors had been calling for the observance of a general statewide Thanksgiving on an annual basis continuously since Governor DeWitt Clinton issued his Thanksgiving proclamation in 1817.

Previously, Federalist Governor John Jay had issued a proclamation recommending November 26, 1795, as a day of public thanksgiving but Jay’s recommendation quickly became a political football. Democratic-Republicans assailed Jay for using the civil government to influence religious institutions to declare a religious holiday. Others saw “the cloven foot of monarchy in this business.” Jay held office until 1801 but never issued another Thanksgiving Day proclamation to the Empire State.

The days chosen for state Thanksgivings by Clinton and his immediate successors were all Thursdays but they ranged in date from as early as November 5 to as late as December 21.

On the national level, there were no calls from the president for the observance of a general day of Thanksgiving on an annual basis until President Abraham Lincoln set the precedent on October 3, 1863 when he issued a proclamation inviting Americans “to observe the last Thursday of November next, as a day of Thanksgiving and Praise to our beneficent Father who dwelleth in the Heavens.”

When Andrew Johnson became president, he followed the precedent established by Lincoln and also proclaimed annual national days of Thanksgiving. All of them were scheduled to be held on the last Thursday of November, except for Johnson’s first Thanksgiving which he set for December 7.

In 1871, President Grant continued the custom set by Lincoln and Johnson. Unfortunately, Grant’s choice of November 30 for Thanksgiving Day came in conflict with Governor Hoffman’s choice in New York for a Thanksgiving to be observed on November 23.

New Yorkers had two Thanksgivings to choose from until November 1 when Governor Hoffman revoked his proclamation naming November 23 and went along with Grant’s choice of November 30. Hoffman explained he had changed his mind because he wanted to encourage “peace and good will” and not “contention.” He added, “It becomes those in authority to set to the people the example.”