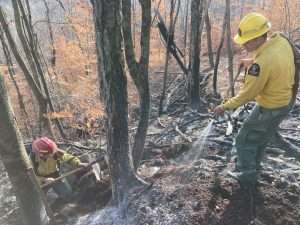 The first fire was reported to Rangers in the village of Poland in Herkimer County at about 12:30 pm Sunday. Forest Rangers McCartney and Murphy responded to a call for a wildland fire on Newport Road in the village. Rangers estimated the fire was 7.2 acres.  Four local fire departments joined the effort, which was caused by debris burning. 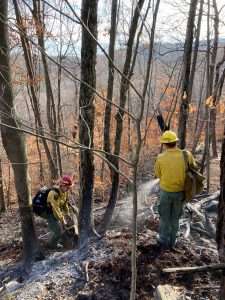 At 1:05 pm, within a half-hour of reports of the Poland village fire, DEC’s Ray Brook Dispatch requested Forest Ranger assistance for a wildland fire off of Lake Edward Road in the town of Bleeker, Fulton County. Three Rangers joined firefighters from six fire departments to work on suppression efforts. By 6:40 pm, firefighters contained the 18.8-acre fire. One camper trailer was destroyed but two other structures were protected by fire crews. That fire was also caused by debris burning.

At 2 pm, Forest Ranger Poulton responded to a wildland fire reported as one acre in size on Putnam Mountain in Fort Ann, Washington County. Ranger Poulton determined the fire was actually 11.3 acres at the time of response. Ranger Donegan responded with a six-wheeler and additional tools. Five hours later, fire crews had the fire, which was caused by a campfire, contained after growing to 13.7 acres.

Although the Fire Danger has returned to LOW, it had been elevated to MODERATE through the weekend.

MODERATE Fire Danger means “Fires can start from most accidental causes but, with the exception of lightning fires in some areas, the number of starts is generally low. Fires in open cured grasslands will burn briskly and spread rapidly on windy days. Timber fires spread slowly to moderately fast. The average fire is of moderate intensity, although heavy concentrations of fuel, especially draped fuel, may burn hot. Short-distance spotting may occur, but is not persistent. Fires are not likely to become serious and control is relatively easy.”

Photos of the Fort Ann fires provided by DEC.