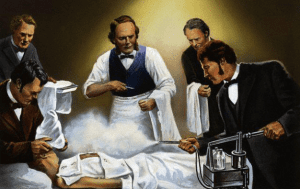 We can however, glean some insight into this period from old newspapers, a wonderful book on the 134th NY Volunteer Infantry, minutes of the Schenectady Common Council, and old stories from the Efner Center and the Schenectady County Historical Society library.

Many 19th century Americans never visited physicians. When they got sick they turned to self-help books such as Domestic Medicine: ; or, The family physician: being an attempt to render the medical art more generally useful, by shewing people what is in their own power both with respect to the prevention and cure of diseases. Chiefly calculated to recommend a proper attention to regimen and simple medicines, which was so popular it went through 30 editions.

Newspapers carried advertisements for all kinds of patent medicines promising cures for all sorts of diseases. One was Moffit’s Little Pills which treated dyspepsia, flatulence, fever, dropsy (edema), and piles. This concoction was prepared on Broadway in Schenectady. To its credit, the Medical Society forbade its members from using nostrums whose ingredients were secret, and disciplined two doctors whose names appeared on a label endorsing a patent medicine.

The 1860 population of Schenectady County was 20,000, of whom 9,000 lived in the City. Twenty per cent were German and Irish immigrants. There were 4,500 farms. The Schenectady Locomotive Works employed 600 men. In this pre-automobile era, doctors practiced in Mariaville, Scotia, Duanesburgh, Pattersonville, Quaker Street, Sloansville, Esperance, Rexford Flats, West Charlton, and Schenectady.

The number one illness in Schenectady was tuberculosis, causing more than one fifth of all deaths. TB was the most common cause of discharge from the Union Army during the Civil War, after gunshot wounds. It was not until 1904 that Governor Theodore Roosevelt signed the public health law that led to the opening of Glenridge Sanitarium in 1907, which started as a summer camp on Altamont Avenue. The second leading cause of death was cholera.

Since 1818 a City Physician had been selected by the Common Council, to provide medical and surgical care for all indigent persons, examine canal boat crews for cholera, provide small pox vaccinations, and consult on public health. Schenectadians seem to have enjoyed better medical care than the average American of the time. In his 1858 report to the City Common Council, the City Physician stated that “epidemics have rarely visited us, except in a form much less malignant than in other places.”

There were several factors that contributed to relatively good health, including geographic location, a municipal government concerned about public health, proximity to Union College and Albany Medical College, and some highly qualified physicians. Local government was responsive to public health matters. The Mayor kept a “Book of Complaints.”

Citizens were asked to report nuisances deemed to be prejudicial to the health of the City. Before the discovery of germs by Anton van Leeuwenhook in 1676, and for a considerable time thereafter, it was thought that disease was caused by “miasma,” noxious exhalation of poisonous air from putrid organic matter.

In 1700, French physician Andry Nicolas (1658-1742) wrote that microorganisms caused smallpox, but his theory took decades to gain credence. The progressive Schenectady City Council of the 19th century, by cleaning up the filth, undoubtedly improved the public health by eliminating breeding sites for mosquitoes, which can spread yellow fever and malaria, and houseflies, which can carry many infections. This was decades before flying insects were associated with disease.

The Civil War was bad for the health of our soldiers, twice as many dying from disease than from their wounds. In September, 1862, Schenectady soldiers of the 134th New York Volunteer Infantry were mustered in at Camp Veeder along the Schoharie Creek. The first death occurred even before the regiment left camp, a 21-year-old recruit. Fifteen more died on the way south and 32 died before the first battle. The cause of death for most of them was listed as typhoid fever, an infectious disease caused by the salmonella bacterium. The symptoms are fever, abdominal pain, diarrhea, and death.

New York State was one of the first to require medical licensing, which became the primary objective of the Schenectady County Medical Society. At its founding in 1810, the Society established the Board of Censors, which examined prospective candidates on Anatomy, Physiology, Surgery, Midwifery, Materia Medica, Pharmacy, Theory and Practice of Physic, and Chemistry. Some states and territories have no requirements whatsoever, and anyone could call himself a physician. Here, however, many local physicians were graduates of Union College, which had departments of chemistry and physics, and with the establishment of Albany Medical College in 1838, they had the opportunity for a formal medical education.

However neither a college degree nor a medical degree was required to receive a license. As late as 1870, Schenectady County was licensing members who had not graduated from a medical school, but rather on the basis of the examination of the Society’s Broad of Censors. 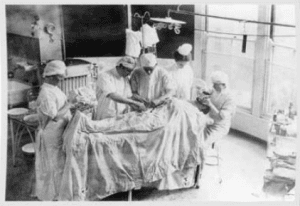 Given the primitive level of medical knowledge in New York State in the 1860s, what difference did it make to the ability of physicians to practice effectively? And what influence did the Civil War have on American medicine in general? Even at that time there were certain drugs that were effective for specific conditions, such as colchicine for gout, quinine for malaria, opium for diarrhea, and morphine for pain. All except opium are still in use today (although other opiates derived from the natural alkaloids found in the resin of the opium poppy remain in use).

Another example of the advance of medicine during the Civil War was the end of “heroic therapy.” This age old treatment involved bleeding or purging the patient. This was common practice before the War.

George Washington was bled on his death bed when he was suffering from complications of streptococcal pharyngitis, a treatment that hastened his demise. Bleeding was also used locally. In 1834 the Schenectady Cabinet recommended bleeding for cholera. And Union College Worthy Jonathan Pearson (an early advocate for the formation of a Schenectady Historical Society) wrote in his diary that his physician bled him.

In 1847, fourteen years before the advent of the Civil War, Hungarian physician Ignaz Philipp Semmelweis (1818-1865) began an intensive campaign to convince surgeons to wash their hands vigorously prior to surgery, but it was many decades before the world took notice. The War ended in 1865, the year of his death, and by whatever coincidence, it was that very year that Sir Joseph Lister (1827-1912) of England published a paper that stressed the importance of antiseptic surgical environments, and the year that Abraham Lincoln may have died for lack of knowledge of proper medical treatment. Lister’s advice spread throughout Europe fairly quickly, but much more slowly in the United States. (Listerine is named for Lister).

For far too long in mid-19th century Schenectady, the practice of “homeopathy” was rife. The term was coined in the early 1800s by its founder, Dr. Samuel Hahnemann (1755-1843) of Germany. A basic tenet of homeopathy is “like cures like.” For example, a tiny amount of coffee could supposedly cure insomnia.

Another tenet was that the more dilute an alleged remedy, the stronger effect it will have on the body. Hahnemann’s students brought homeopathy to the United States where it prospered and competed with traditional medicine. Hundreds of homeopathics volunteered to serve in the Medical Corp during the Civil War, but their offer was declined by President Lincoln. In 1900, there were hundreds of homeopathic hospitals and 22 homeopathic medical schools.

For many years, homeopathic physicians may have had better results with their dilute remedies, which probably could at least do less harm, than traditional physicians with their “bleed, em and purge, em” treatments. In 1862 the Schenectady Evening Star and Times carried an advertisement from Homeopathic Physician Dr John V. Riggs “giving special attention to private and chronic disease including the numerous class requiring the use of electricity for a speedy cure.” But when the Medical Society reorganized in 1870, its by-laws stated that “none but regular physicians may be members.” 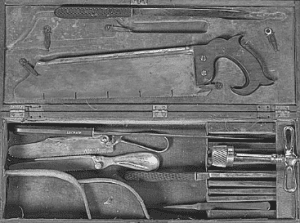 Schenectady was fortunate in having several distinguished physicians during the 19th century. One was Dr. James Van Ingen, Union College Class of 1840. He went to France for advanced training and became an expert at orthopedics, and his scientific articles were cited in medical text books. He served with the 18th Infantry, New York Volunteers during the Civil War, and also served several years as City Physician. His grandfather, Dr. Dirck Van Ingen, born in Holland, was the Commander of the Continental Army Hospital on Lafayette Street and was a founder of Union College.

Van Ingen, the grandson, was a large man, 6-foot, 3 inches tall, who weighed over 300 pounds. He was said to be an eccentric with a bad temper and had numerous squabbles, several of which led to fist fights. He was a familiar figure around town, wearing a beard, cape, and broad-brimmed hat, and often carried a whip or a gun.

Dr. Van Ingen would sometimes be called for a second opinion by the family of a patient undergoing homeopathic treatment from a certain Dr. Swit. Dr. Van Ingen would call for all homeopathic medicines prescribed by Dr. Swit, drink them down on the spot, and declare to the patient and his family “there you are, not a bit of potency in all that medicine.” Dr. Swit got his revenge however; he gave all of his patients an unlabeled, undiluted bottle of ipecac (an emetic, which induces vomiting), with the instruction to take one drop in water once weekly.

The next time Dr. Van Ingen consulted on a patient of Dr. Swit he swallowed all of his competitor’s supposedly “impotent” medicine, became violently ill, and lost a good portion of his 300 pounds.

Photos, from above: Joseph Lister calls for an antiseptic spray prior to surgery courtesy Bettmann/CORBIS; Surgical suite, mid-1880s; and Medical instruments, mid-1880s.