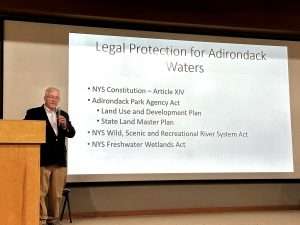 At Adirondack Wild’s October meeting at the Paul Smith’s Visitor Interpretive Center, lakes and ponds came under the spotlight in a panel discussion about Cooperative Stewardship of Adirondack Lakes. Of particular interest was a given lake’s classification and subsequent comprehensive study, planning and management.

If Adirondack waterbodies are considered part of the Forest Preserve, and for the last fifty years the State Land Master Plan talks about land and water, then the law requires that lakes and ponds be classified, just as forests are. That raises important questions.

If the lakes are classified, then they are subject to unit management planning, just as trails, trailheads and mountain summits are. The classification sets the basic guidelines and legally required outcomes. If lakes and ponds are subject to Unit Management Plans (UMPs), then their carrying capacity, or ability of lakes and ponds in the Forest Preserve to withstand a variety of present and anticipated future uses, must be evaluated, like the requirement to measure and assess actual and projected public use on our forest’s trails and summits.

I am not suggesting such assessments are an easy or inexpensive thing to do. Under the APA Act, however, it is a legal requirement, however often left untried or unfinished. And the state legislature just appropriated a lot more money than the New York State Department of Environmental Conservation (DEC) has ever had before for wilderness protection and management.

Although the State Land Master Plan (SLMP) talks about lakes and ponds having “their carrying capacity from a physical, biological and social standpoint just as do tracts of public or private land,” the SLMP’s urging of a “comprehensive study of Adirondack lakes and ponds” has never gotten underway in fifty years. From a chemical and biological standpoint, about 55 Forest Preserve lakes have been intensively studied in a long-term monitoring survey by the DEC Adirondack Lake Survey Corporation (now administered by the Ausable River Association). But not from a physical or social standpoint.

For decades APA and DEC have declined to classify lakes where even a small percentage of the shoreline is in private ownership. Years ago, it was explained to me that is because the state employs British Common Law, granting a private shoreline owner underwater ownership in the form of a wedge out to the center of a given lake.

An example of the state’s reluctance to classify is Little Tupper Lake in Hamilton County. Because of a few private ownerships, occupying just a short piece of that shoreline of the 2,300-acre lake, APA and DEC left Little Tupper Lake out of the William C. Whitney Wilderness classification of the surrounding lands. Little Tupper Lake, stated the Master Plan, was to be “managed as wilderness” due to the surroundings, but not classified as such. The same is true of Thirteenth Lake in Warren County, surrounded by Siamese Ponds Wilderness but left out of its Wilderness classification due to the very small width of private shoreline, now protected by a conservation easement thanks to the cooperation of the landowners and the Adirondack Land Trust.

One problem of not classifying a lake surrounded mostly by Forest Preserve, but not entirely, is demonstrated at Lower Saranac Lake, where 95% of the lake is surrounded by Forest Preserve Wild Forest. There, litigation ensued in 2021 when a private motorboat marina at one end of the lake was approved for significant expansion by the Adirondack Park Agency in the absence of any study or understanding of the lake’s overall classification, relevant guidelines for its management and use, and studies of carrying capacity. Earlier, DEC had greatly expanded a nearby public boat launch without undertaking any carrying capacity studies.

The 2019 Saranac Lakes Wild Forest unit management plan approved by DEC and APA acknowledges responsibility for undertaking such studies but fails to specify how or when. Adirondack Wild and other argue that the APA is required to classify State-owned bodies of water, such as Lower Saranac Lake, even if the water is contiguous to a private land holding. That was the 2011 legal holding of an appeals court in Albany concerning Lows Lake in Hamilton County.

The boy scouts’ ownership of a tiny part of that shoreline of Lows Lake gave DEC reason, or pretext, not to classify Lows Lake as Wilderness consistent with the rest of that enormous lake. APA went along with that until litigation ensued. The Court in 2011 stated unequivocally that the private shoreline owner had littoral rights but did not own the water surface or the beds of the lake. The Court ordered the State of New York to, according to the State Land Master Plan, classify the surface, bed and banks of Lows Lake, which are now classified as well as managed as Wilderness. Clearly, neither agency has grasped the consequence of that court ruling beyond its application to Lows Lake.

2011 or thereabouts was also a time when Dr. Chad Dawson of the State University College of Environmental Science and Forestry submitted a preliminary methodology for determining the carrying capacity of waterbodies to the DEC. Chad was contracted to do this work by the DEC. He submitted that methodology on schedule and as requested, but neither DEC nor APA have put it to use in the ensuing decade. Why? Dr. Dawson noted in the Adirondack Wild meeting that DEC and APA were afraid of it because of the additional effort and expenditure required, but also because carrying capacity measurements and assessments would subsequently inform and perhaps influence a given lake’s management and use.

One day in 1987 veteran wilderness conservationist Paul Schaefer sent me, an Adirondack rookie at the time, to DEC Ray Brook to inquire from DEC Region 5 what large lakes the department considered to be Forest Preserve lakes. I must have mentioned some acreage cutoff to be considered “large.” At the Ray Brook office of DEC, I met the regional bureau chief for real property, Dale Huyck. I liked Dale immediately and enjoyed our conversations then and in ensuing years. I asked Dale the question Paul Schaefer wanted me to ask.

Dale reached into his desk and removed a sheet of paper and handed it to me. On it was typed a list of large lakes DEC considered to be Forest Preserve lakes. That’s it, I asked? That’s it, Dale replied. What about the 700 or more lakes surrounded by Forest Preserve Wilderness areas, I asked? Dale explained that the list he gave me were lakes not surrounded by Forest Preserve; they contained some privately owned shoreline, but DEC still considered them Forest Preserve lakes. For instance, I noticed the nearly 5,000-acre Raquette Lake was on Dale’s list. There was a lot of private ownerships, including many contested ownerships at Raquette Lake. I left the meeting confused. All these years later, I still am. So, it appears, is the DEC.

In 1996, the state’s Attorney General Dennis Vacco issued an opinion to the state’s environmental conservation commissioner that, in his opinion, the state lacked the authority under Article XIV, the “forever wild” clause of our state constitution, to issue a temporary revocable permit that would allow power cables to be installed underneath Raquette Lake and Big Moose Lake to reach several private owners on the far shores of those lakes. The AG advised DEC that:

“Raquette Lake and Big Moose Lake are indisputably part of the forest preserve. While obviously the laying of cable on the lakebed poses no threat to wooded areas, the Constitution prohibits the sale, lease or exchange or taking by any corporation of any land that is part of the forest preserve. The prohibition applies not only to wooded areas but to all forest preserve land. Further, as indicated earlier, the debates demonstrate an intent to preserve the watershed feeding the streams and lakes which in turn serve as a source of water for the rivers. In that the two lakes are protected by this constitutional provision, we must consider whether the grant of these TRPs to place cable on the beds of the two lakes within the forest preserve constitutes the grant of an interest in forest preserve land that is prohibited.”

I conclude with Lake Placid, which is mostly surrounded by private land in various private land classifications. A small amount of Forest Preserve Wilderness comes down to the lake’s shores. Brendan Wiltse, Senior Research Scientist with the Paul Smith’s College Watershed Institute, told Adirondack Wild’s meeting that a consulting group attempted to measure that lake’s carrying capacity in 1990 and deemed that the lake had on that peak summer day 354 boats at the dock. In 2020, counted on the same day as in 1990, 584 boats were docked on Lake Placid.

A simple carrying capacity measurement is X surface water acres per boat, said Brendan. Using that measurement, 145 boats would, according to the 1990 study, reach the capacity of Lake Placid but, as he explained, that simple measurement fails to consider the type of boat or the behavior of the boat and its occupants. Today’s tour passenger boats and surf wave boats, for example, have an exaggerated impact on lakes and lake shorelines. The intensity of armoring and development to which shoreline owners subject their own shorelines also plays a role in measuring a waterbody’s carrying capacity.

Overall, there is a “blurry picture” of how to measure and assess carrying capacity on Lake Placid, said Brendan, and application of best science is only of some help. New York State must begin to provide more clarity in this area because, as Brendan explained, at Lake Placid “no one is taking charge.”

To add clarity, Chad Dawson suggested three courses of action, in this order: First, persuade DEC in the courts or in the court of public opinion to identify, study and recommend to APA classifications of all Forest Preserve lakes. Without classification, there can be no legal guidelines for public management and use. Second, seek from the NYS Legislature clarification that lakes and ponds are subject to classification and unit management planning regardless of shoreline ownership. Third, consider specific state legislation for the management of specified watersheds and waterbodies, such as Lake George has had since 1961.

To pursue these and other questions, Zoe Smith of the Paul Smith’s College Watershed Institute suggested to the Adirondack Wild meeting that we collectively do so through membership and involvement in the Adirondack Lakes Alliance, which I just joined.