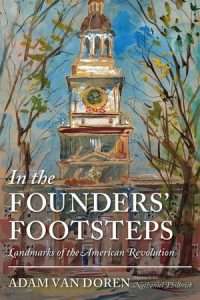 The book In the Founders’ Footsteps: Landmarks of the American Revolution (David R. Godine, 2022) by Adam Van Doren takes a look at the original thirteen colonies in search of historical sites and their stories in America’s founding.

In the Founders’ Footsteps features thirty-seven landmarks, with fifteen additional locations noted in brief. From the Bunker Hill monument in Massachusetts to the Camden Battlefield Site in South Carolina, this is a tour of an American cultural landscape with a curious, perceptive, and insightful guide.

The reader steps inside cabins at Valley Forge where nearly two thousand soldiers perished during a cruel winter, meets the chef at Philadelphia’s City Tavern where the menu is based on 18th century fare, seeks out the Swamp Fox in Georgia, visits the homes of Alexander Hamilton, John and Abigail Adams, the Joseph Webb House on the Connecticut River where French general Rochambeau made plans with Washington, and more.

Adam Van Doren received his masters at Columbia University and has been a visiting artist at the American Academy in Rome. He teaches art at Yale University, where he is also an associate fellow, and has exhibited at the National Portrait Gallery in Washington, D.C., among other institutions. His work is included in the collections of the Art Institute of Chicago, the Museum of Fine Arts, Houston, the Wadsworth Atheneum, and the Museum of Fine Arts, Boston. He is the author of The House Tells the Story: Homes of the American Presidents, The Stones of Yale, and An Artist in Venice. Mr. Van Doren lives in New York City.

The Fraunces Tavern Museum will host Adam Van Doren for a talk on In the Founders’ Footsteps on Thursday, November 10th, at 6:30 pm. This lecture will take place both in person, and virtually via Zoom. Tickets are free for museum members and virtual attendance, $5 for in person. To register, click here.