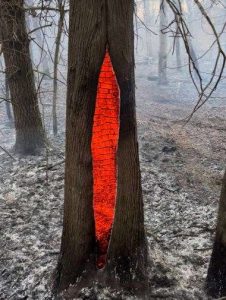 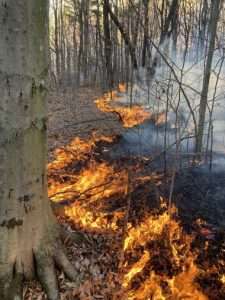 The fires, caused by a combination of debris burning, smoking, and other issues, burned in the towns of Brasher, Cairo, Denning, East Fishkill, Huron, Port Jervis, and Russia in Dutchess, Greene, Herkimer, Orange, St. Lawrence, Steuben, Ulster, and Wayne Counties. All of the fires, which burned approximately 119 acres, are currently out, contained, or in patrol status. Dry weather and windy conditions lead to fires that spread more quickly.

The largest of these fires began in Jasper, Steuben County on Thursday, November 10th at about 10:55 am when Forest Ranger Captain Rogers, Rangers Cordell and Dormer, and four fire departments responded to a wildland fire in Turkey Ridge State Forest estimated at 10 acres.

By 4 pm, 11 fire departments and approximately 75 personnel were helping with suppression efforts on the fire, which grew to more than 25 acres. Due to fuel conditions, topography, and wind, the fire spread rapidly the rest of the evening and overnight.

By the following day, the fire grew to approximately 370 acres. Significant rainfall reduced the danger of the fire growing larger. Rangers Oldroyd and Staples continued putting out hot spots throughout the weekend. The fire remained in patrol status this week with Rangers checking hot spots and mopping up.

Photos, from above, provided by DEC: A tree burns at the brasher fire and the Turkey Ridge State Forest fire.