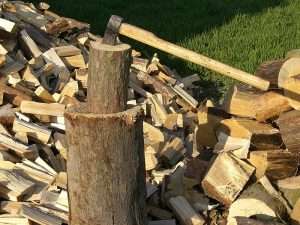 For many of us, this season involves hunting, gathering, and preparing for a long, cold winter. This often includes stacking (or restacking) the firewood that’s been seasoning while we enjoyed the laid back warmer months of summer. Humans have used wood as a source of heat since they learned to control fire more than a million years ago.

For many in the Northeast, it’s a secondary, cost effective, and efficient way to heat our homes. In addition to home heating, firewood is often a component of camping and recreating. Moving firewood, however – whether for home heating or camp site ambiance – can spread exotic invasive pests and cause harm to the forest.

One notable example is the emerald ash borer, an invasive insect easily transported in firewood, which has killed hundreds of millions of ash trees in the United States since it was introduced to Mighigan from Asia in 2002. This wood boring insect spends most of its life cycle as larvae developing within ash trees. The larvae survive in the wood and emerge as adults within 1 to 2 years, even after a tree has died or been cut down. Therefore, when firewood infested with emerald ash borer or other wood borers is moved, the insects are moved with it and can create new infestations.

Other invasive pests moved with firewood include insects that lay eggs on trees, such as spongy moth, winter moth, and spotted lanternfly. These egg masses will overwinter on unburned firewood and hatch the following year. Additionally, pathogens that cause tree diseases such as sudden oak death, oak wilt, laurel wilt, and thousand cankers disease can travel in firewood.

Surveys of out-of-state campers at New Hampshire state campgrounds found that many brought firewood from home, traveling from as far away as California and Florida. With the price of campground firewood often as much as a dollar a stick, it’s understandable why many campers grab leftover wood from their wood piles or pack up the tree that’s been lying in the yard since it died. But the cost of moving infested wood can be much greater, both ecologically and economically. 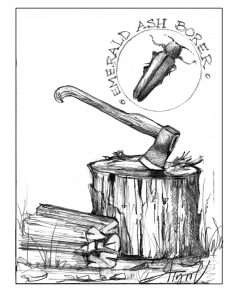 The USDA also estimates that damage from wood boring insects costs local governments throughout the country $1.7 billion and homeowners nearly $830 million in lost residential property values annually. To help curb this loss, many states regulate the movement of firewood – including wood of all species and log lengths meant to be used as fuel – across state lines.

There are several steps consumers can take to ensure they are not violating state regulations and that their wood is not contributing to the spread of invasive pests. These include using local firewood for home heating and buying certified heat-treated wood when transporting firewood long distances.

One source to help locate local wood is the Firewood Scout website, where you can find firewood by entering the location of your residence or camping destination.

Other sources of local wood include wood banks, which provide firewood for those in need. There are several wood banks in towns throughout the Northeast. Check your local state forestry or extension office for locations, or visit firewoodbanks.org. When it comes to firewood, local refers to the closest source available to a destination.

A general rule adopted by some states is to not move firewood more than 50 miles, unless it is heat treated. Certified heat treated wood is dried in a kiln for a specified time and temperature, which lowers the moisture content in the wood and kills pests. In states that do not allow out-of-state firewood, certified kiln dried wood is legal and safe to move.

This firewood season you can help protect the trees you love by spreading the word, not the pests.

Jen Weimer is a forest health expert, photographer, and writer living in the forests of New Hampshire. Photo of Stack of split firewood and a maul for splitting courtesy Wikimedia user Chmee2. Illustration by Adelaide Murphy Tyrol. The Outside Story is assigned and edited by Northern Woodlands magazine and sponsored by the Wellborn Ecology Fund of the New Hampshire Charitable Foundation.