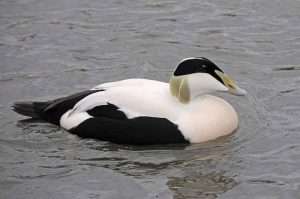 Due to an outbreak of Highly Pathogenic Avian Influenza (HPAI) in the St Lawrence waterway in Canada, an estimated 5-15% of nesting eider females died this year, negatively impacting the eider population, likely for several years.

Eiders and other sea ducks are particularly sensitive to population declines due to disease outbreaks because they take 4+ years to become mature enough to breed, have small clutch size (i.e., they lay fewer eggs than other ducks), and mortality of those ducklings is high due to gull predation and the challenges of ocean waters.

Eiders are large seaducks in the genus Somateria. The three extant species all breed in the cooler latitudes of the Northern Hemisphere. Their down feathers are used to fill pillows and quilts, thus the branding name “eiderdown.”

Many of the eiders from the St. Lawrence waterway migrate south to winter in U.S. waters along the Northeast coast, coinciding with Maine’s Coastal Zone waterfowl season.

The daily bag limit for eiders in Atlantic Flyway states is currently 3 of which only 1 can be a hen. There is no change, despite the dramatic decrease.

Instead, New York State is only asking hunters not to shoot female and immature eiders this waterfowl hunting season.

Male eiders are readily distinguishable from female and immature males, as their striking white and black plumage is in stark contrast to the brown of female and juvenile eiders.