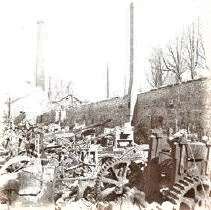 The fires that destroyed both the axe and scythe factories in Bloodville in Saratoga County did not completely end the industrial era of the hamlet, as is widely believed.

There were actually a few valiant efforts to reestablish manufacturing in the years that followed.

The hard-edge tool factories of Isaiah Blood (1810-1870) dominated the economy of Ballston Spa’s suburb of Bloodville for over 50 years. It can be said that Isaiah Blood is the “forgotten” entrepreneur of Ballston Spa. His scythe and axe works were famous throughout the country long after his death, but few documents survive to this day that describe his personal accomplishments and motivations.

Blood did not own the largest scythe and axe factories in the country, but they rivaled or exceeded all but a few. Prior to the Civil War, a factory was considered large if it gave employment to fifty people; Blood regularly employed over two hundred. In the New York Mercantile Union Business Directory of 1850, Blood was one of only seventeen scythe makers in the state, and at the time he was by far the largest. Only a few of the twenty-one axe makers in New York were as large as Blood’s, notably the factories of nearby Cohoes.

One reason Blood’s legacy faded so quickly was the destruction of both of his factories and the extinction of his direct family line. Blood’s own son died at a young age, as did his daughter’s children, so that by the 1920s there were no direct descendants left. The absence of any descendants to retain family photographs and records leaves a void that cannot easily be filled. Although his son-in-law continued to operate the business for twenty years after Blood died, both the scythe and axe factories were consumed by fire in 1900 and never rebuilt. This sudden and complete loss was devastating to the hundreds of skilled workers employed there, most of whom were forced to move away.

Bloodville presented a tempting location for businessmen who wanted to start up a mill. The Kayaderosseras Creek still provided adequate water power that only had to be supplemented by steam engines during the summer. The Ballston Terminal Railroad passed through town and was designed to haul freight cars to the Delaware and Hudson interchange in Ballston Spa. Nearby lived hundreds of well-motivated men looking for employment close to home.

A man named John Butler began investigating what it would take to build a paper mill on the site of the old axe factory. He told a newspaper reporter that he was planning to erect a concrete dam that would utilize the water power of both the axe and scythe factory sites, giving the mill “a power of over 40 feet head and at the same time a large storage capacity.” His plans at the time also called for erecting a large, four-machine mill that would manufacture paper specialties and employ about 150 men. Local residents were saddened when Butler died unexpectedly before he could begin construction on the project.

In August 1904, J. E. Weatherbee of Carthage, Jefferson County, NY, announced that he and several capitalists were interested in picking up where Butler left off. He recruited Bloodville resident James Lowell to become the superintendent in charge of building the mill. Lowell was considered a good choice for the job since he had just completed building a giant paper mill in Sturgeon Falls, Canada for the Imperial Paper Company.

Excitement in the community ran high as construction of the mill actually commenced and reached a rapid completion. It was a substantial building measuring 130 feet by 60 feet in size. The first floor contained the perforating and core-making machines, while the second floor was used to store boxes.

Once the mill was finished and equipped it began the manufacture of bathroom tissue and other niche paper products under the name Ballston Pulp and Paper Company. The plant had three 1,000-pound beating engines, one refining engine, and one 92-inch single cylinder machine powered by water and steam. Production amounted to six tons of roll and package bathroom paper per day.

Unfortunately, the new owner did not have much better luck with avoiding fires. Four years after the mill started operations, fire destroyed what was known as the “Toilet Mill,” causing about $8,000 in damage.

A smaller paper mill was quietly built closer to the creek that manufactured specialty paper. This mill operated for several years but could not compete with larger paper mills. It closed in 1912 soon after an employee named George Bush died in an old flume while trying to repair the dam.

The American Axe and Tool Company, which sold the property to Ballston Pulp and Paper, foreclosed on the mortgage in March 1913. The property was purchased at foreclosure by Robert Hunter of Fulton, New York who stated that he planned to open the mill back up again and continue to manufacture tissue paper. However, the mill lay idle for several more years until it was purchased by the United Paper Company of Atlanta, Georgia in 1917. It was only in operation for one day when it was destroyed by fire, causing $50,000 in losses.

This was yet another heavy blow to the hamlet of Bloodville, as the mill had just been renovated and would have provided jobs to several dozen men. No other mill activity is recorded at the site of Isaiah Blood’s old axe and scythe works thereafter but many of the homes in the hamlet today still hark back to that era.

Timothy Starr has published 18 books on local history in Saratoga County and the Capital District and is a former board member of the Saratoga County Historical Society.