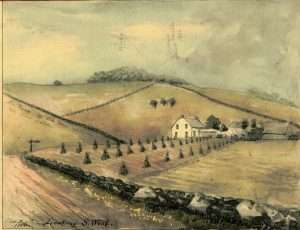 Colonel John Brown, leading a force of New York and Massachusetts revolutionaries left Fort Paris in Stone Arabia in an attempt to attack what he believed was a smaller, isolated enemy force.

Instead, Johnson’s much larger force defeated the revolutionaries in a running battle, during which Brown was killed. The events, which took place in St. Johnsville, Montgomery County, NY, are now known by the various names Battle of Klock’s Field, Battle of Failing’s Orchard, Battle of Nellis Flatts or the Battle of Stone Arabia.

The Fort Plain Museum was the recipient of a 2018 American Battlefield Protection Program Grant which funded a study of the battles fought on October 19, 1780. South River Heritage Consultants, a firm specializing in Revolutionary War battles, examined the assembled research from the battlefields and issued a report.

The Fort Plain Museum will host researchers Wade Catts and Robert Selig to present their findings in a presentation, “Battles of Stone Arabia and Klock’s Field: a National Park Service Study,” set for Friday, November 11th at 7 pm. The presentation will shed new light on the scope of the battles and help define the overall boundaries of the battlefields.

The report, filed with the National Park Service, is expected to serve as a roadmap for future exploration of the battlefield sites and clear the way for future archaeological and interpretive research grants.

The Fort Plain Museum is located at 389 Canal Street, in Fort Plain, NY. For more information email info@fortplainmuseum.org or visit the Museum website.