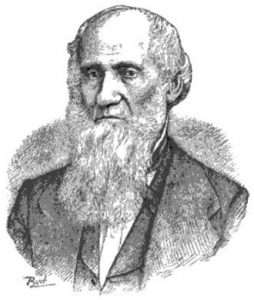 By the age of seventeen, he passed the required examination for common school teaching and taught part time to finance his education. In 1822-1828 he attended Hartwick College in Otsego County; Fairfield Academy in Herkimer County; and graduated from Union College, Schenectady in 1830. He spent the next few years working as a surveyor for the Baltimore & Ohio Railroad and married Anna Case.

Whipple’s first years after graduation saw the construction of the young railroad system and the expansion of the Erie Canal. Whipple was very involved in both of these historic developments.

From 1825 until after the Civil War, the Erie Canal was one of the major commercial routes in the United States. It was constantly undergoing repair and expansion and from 1833-1836, Whipple did surveys for the construction and maintenance of the canal.

In 1836-1837, he left the canal and went to work for the New York & Erie Railroad as resident engineer, before returning to canal work in 1838. One of the problems the canal operators were having was that tolls on the canal were based on weight. As the canal was being widened and larger boats constructed, the weighing system became inadequate.  In 1840, Whipple designed and constructed a scale for weighing boats of three to four hundred tons. Weigh stations were constructed at Albany and at various points throughout the length of the canal. 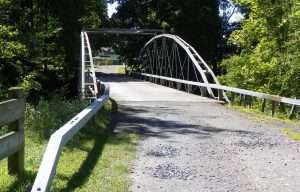 When plans were drawn in 1840 to widen the Erie Canal, Whipple recognized the need for hundreds of new bridges to span the enlarged waterway. As the Erie Canal traversed the width of New York State, a new bridge had to be constructed almost every time a road was cut.

At the time, bridges were constructed of wood or stone. Wood was the mot susceptible to the elements; stone bridges were much stronger and lasted longer, but were more expensive owing to the difficulty of construction.  A stone bridge could not span a long distance without many piers that restricted navigation and could be damaged by ice. A light, strong and inexpensive bridge was for the canal.

Whipple successfully analyzed the stresses in iron bridges and designed an iron truss bridge. When his idea met with skepticism, he decided to build it himself. With $1,000 he constructed the first iron bowstring truss bridge over the canal at Utica. In 1841, he patented his design that became known as the “Whipple Truss Bridge.”

His design called for a curved upper chord or bow, from which were suspended “V” shaped chords of wrought iron connected to a metal deck that supported a roadway.

Whipple subsequently constructed several iron truss bridges for the New York & Erie Railroad but these had to be removed when a different iron bridge, designed by someone else, failed and a panic resulted. Passengers refused to travel over iron bridges. Whipple’s work was set back for almost ten years.

Around 1850, the iron truss bridge again became acceptable and approximately thirty of them were constructed, mostly on the Erie Canal and mostly designed by Whipple. In 1847, Whipple published the first textbook, A Work on Bridge Building, outlining his design theories and practices.

Although Whipple was granted a patent on his bridge design in 1841, many others copied his designs and ideas without paying royalties. New York State declared his design to be “for the public good” and even though state engineers specified his bridge for many projects, they refused to pay royalties. Whipple tried for years, without success, to collect royalties on his designs. He either built or assisted in the building of 70 to 100 truss bridges over the Erie Canal.

Books on the history of engineering compare Whipple’s contributions to iron bridges to be comparable to James Watt’s steam engine, Robert Fulton’s steamboat and Alexander Graham Bell’s telephone. Each of those men became wealthy from their inventions and patents, but not Squire Whipple.

In 1863, Alexander Holly brought the Bessemer steel making process over from England and the first structural steel was produced at Erastus Corning, John Flack Winslow and John Griswold’s Albany Ironworks in Troy. In 1869, Whipple published his advanced textbook An Elementary and Practical Treatise on Bridgebuilding.

In 1873, Whipple designed and built the first patented lift drawbridge over the canal at Utica. 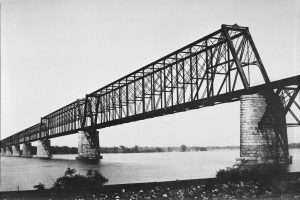 In 1899, the Albany and Delaware Turnpike (Delaware Avenue) was being reconstructed to the north of the original route. A side road was to descend to Normansville over a tributary to the Normanskill Creek. A Whipple Truss Bridge constructed by S. DeGraff of Syracuse in 1867–69 was moved from the Erie Canal at Utica and used for the span. This bridge became one of the last four remaining Whipple Truss Bridges in the northeast. It is still a well-preserved example of a Whipple Bowstring Arch Truss. It remains in daily use without a weight limit.

Whipple’s analytical design of the iron and later steel truss was also a basis for the design of the skyscraper, an American innovation. At the turn of the century, most immigrants remembered two things upon entering New York Harbor, the Statue of Liberty and the skyscrapers of Manhattan; neither appeared anywhere else in the world.

Illustrations from above: a portrait of Squire Whipple; the Whipple Cast and Wrought Iron Bowstring Truss Bridge over Norman’s Kill in Albany; and the Cairo Rail Bridge Completed after Whipple’s death, featuring two 518-feet Whipple truss spans, was the largest of that design ever constructed.