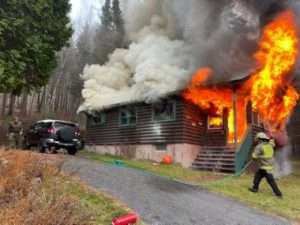 The family of the 25-year-old from Hudson in Columbia County, NY, had reported the individual missing and indicated he might be despondent and suicidal.

At 2:50 pm the following day, a passerby alerted Rangers to a house fire approximately one-half mile away from their command post. Rangers and Hamilton County Sheriff’s Deputies pushed through the door and found the subject of the search unconscious on the floor.

Lt. Kerr, Ranger Quinn, and Deputy O’Brien pulled the man to safety. Rangers Geesler, Scott, and Temple provided medical treatment until EMS arrived and transported him to the hospital. Rangers were also able to move the homeowner’s vehicle away from the burning house.

The homeowner was not home at the time of the fire and the house is a total loss. The subject faces multiple charges including arson and burglary. An interview with Ranger Quinn about the incident can be downloaded on DEC’s website.