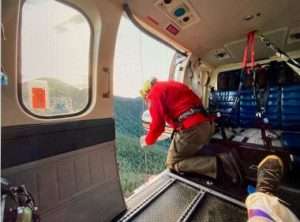 On Sunday, October 30th, at 1:30 pm, while New York State Forest Rangers were battling two wildfires in other parts of the State, DEC’s Ray Brook Dispatch requested Forest Ranger assistance for a hiker with a lower leg injury near the summit of Mount Marcy.

Due to the location and severity of the injury, Rangers Lewis and Praczkajlo called for New York State Police (NYSP) Aviation assistance.

NYSP Pilot Kotronis flew the Rangers to the location. Ranger Lewis was lowered down to the injured 40-year-old who fractured their leg after slipping on ice while descending from the summit, sliding approximately 30 feet, and crashing into a rock. Ranger Lewis splinted the injury and put the hiker, from Newark, Wayne County, NY, in a harness. Ranger Praczkajlo hoisted the hiker before hoisting Ranger Lewis. At 3:40 pm, Pilot Kotronis flew the patient to Adirondack Medical Center for surgery and treatment for her injuries.

At about the same time, Ray Brook Dispatch requested Forest Ranger assistance with another hiker with a leg injury near the Saddleback Cliffs in the town of Keene, Essex County. Pilot Kotronis then flew Rangers Lewis and Praczkajlo to that location.

The Rangers spoke to the 69-year-old from Latham, Albany County, NY, on the phone and guided him to crawl to a safe location for a hoist rescue. The hiker had slipped on an icy and muddy slab, broken his leg, and suffered a laceration to his calf caused by a spruce root. Ranger Lewis was lowered down to harness the subject. Ranger Praczkajlo hoisted the hiker and then Ranger Lewis. At 5:05 pm, Pilot Kotronis flew that patient to Adirondack Medical Center for surgery and treatment for his injuries.

Both hikers had microspikes, but with ice measuring approximately six inches thick, crampons and an ice axe are suggested to help avoid falls. Without the help of NYSP Aviation, these two rescues would have taken many hours, delaying medical care for the two patients.