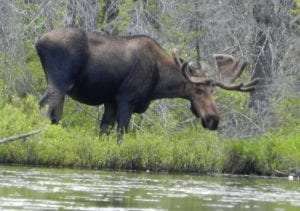 There are several creatures that serve as symbols of the rugged and majestic character of the Great North Woods, yet none is as fitting as the moose. When initially seen, a moose may be perceived as being quite ugly and an unusual choice to represent the beauty of the northern wilderness.

Its disproportionately long legs, awkward gait, protruding hump on its back above its shoulders, rather rough coat and odd looking facial features create an image that may not be very appealing at first glance. Yet, together these characteristics create a unique and overwhelming image to those lucky enough to see one of these giants in the wilds, and they help this massive mammal flourish in a sub-arctic region.

A moose’s exceptionally long legs are ideal for walking in places where a deep snow pack develops in winter. Additionally, the up and down manner in which this behemoth moves its legs further helps it plod through significant accumulations of snow and forest debris. The sizeable hump above its shoulders is added muscle mass that gives extra strength to its front legs for maneuvering through places where large fallen trees restrict movement. This dorsal clump of muscles also helps the moose support its chunky neck and head, especially when there is a rack of antlers protruding from the top if its skull.

The moose’s coat of coarse fur enables it to effectively retain body heat and its grotesquely enlarged and drooping lips enable it to strip sizeable quantities of vegetation from twigs and sticks. In order to maintain a good state of health, an adult moose needs to consume 30 to 40 pounds of browse each day, particularly during the colder months of the year. This snout also provides it with a keen sense of smell, even during the period of intense cold when odor molecules are more difficult to detect.

Despite the moose’s lack of natural enemies in the Adirondacks, this gangly beast possesses a shy temperament making sightings of it a rarity. Unlike the white-tailed deer, which frequently strays into open places to feed making it easy to spot, the moose prefers to wander in forested settings and shrub-laden thickets where visibility is limited. Also, because the moose is most active during periods of twilight, its dark, chocolate colored coat blends in with the shadows of the forest background. Even when it steps into a forest clearing, or ventures through a beaver meadow, the sun is generally below the horizon, and only a dim silhouette of it appears against the background.

While seeing one of these recluses of the Great North Woods is a rarity, there comes a time in mid to late September in the Adirondacks when the likelihood of an encounter is greatly improved. Around the time of the autumnal equinox, moose develop the urge to go on the prowl for reproductive partners. Bull moose are especially known to travel more in their attempt to locate one or several females, also known as cows, as the leaves begin to change color. Even cow moose, particularly those residing in places where there is an absence of bulls, are known to wander more in the weeks prior to the rut.

As the mating, or rutting season approaches, the gentle temperament of the moose, especially the bulls, may be impacted by the heightened levels of hormones in their system. It is never wise to get within a hundred yards of a moose at any time of the year; their sheer size and brute power can pose a serious danger should one view a person as a threat, or worse yet, as a rival. It is always best to observe a moose either from the safety of a car, or from a distance of at least a hundred yards.

Seeing one of these phantoms in the wilds is a rare treat. Its shy and secretive nature greatly limits the chances of catching a glimpse of one, especially in the Adirondacks where the moose population is still in a developing stage.