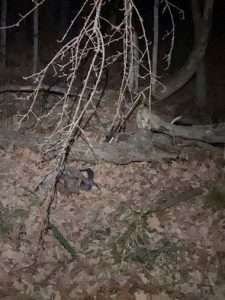 On November 8th at 7:50 pm, New York State Department of Environmental Conservation Forest Rangers Booth, Bronson, Praczkajlo, and Russell responded to a report of an overdue hunter in the town of Dickinson, in Franklin County, NY.

The reporting party found the 79-year-old’s vehicle near Mosier Hill, but could not find the subject.

Rangers found the subject approximately 50 yards from the rifle, scratched, bruised, and hypothermic after falling into a swamp. Rangers removed the subject’s frozen clothes, put him in a hypo wrap, and started a fire.

Rescuers then carried the subject out to an ambulance, which transported him to the hospital. St. Regis Falls Fire, New York State Police, and local camp owners assisted in the search.