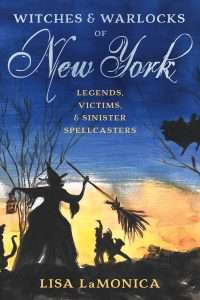 The new book Witches and Warlocks of New York: Legends, Victims, and Sinister Spellcasters (Globe Pequot, 2022) by Lisa LaMonica is a collection of legends and historical accounts about witches and warlocks from the Empire State.

New York has a surprisingly rich and lasting history of witches and witchcraft. Included are a history and origins of witchcraft in New York State and historical tales of “witches” across the state including Hulda, the accused witch who inspired parts of Washington Irving‘s Sleepy Hollow, and the Easthampton accused witch Elizabeth Garlick, accused and tried thirty-five years before the Salem Witch Trials. These stories are known locally in the towns where they occurred but have never been collected into one book before.

Lisa LaMonica is an author and illustrator living in upstate New York, who has won numerous awards for her artwork. Her books include Haunted Catskills and Images of America: Hudson. She has written for such outlets as Chronogram magazine and PBS/WMHT.