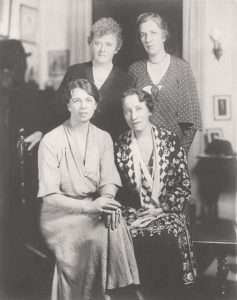 In 1926, Eleanor Roosevelt convened with three of her closest friends, Caroline O’Day, Marion Dickerman, and Nancy Cook, to discuss the probability of a bold new venture. The four women, all active in New York’s Democratic Party, agreed to open a workshop that specialized in the production of Colonial Revival furniture.

Their business would be conducted on the Roosevelts’ Val-Kill property in Hyde Park, Dutchess County, NY and appropriately named “Val-Kill Industries.” Two years prior, Franklin D. Roosevelt built a quaint Dutch Colonial cottage on the property for Eleanor, Marion, and Nancy. This came to be called the “Stone Cottage,” and a more industrial building was constructed for the workshop.

Although Nancy had a passion for producing furniture, it was Eleanor Roosevelt who noted the decline in the American Arts and Crafts movement and wanted Val-Kill Industries to reignite an interest in America’s architectural traditions. However, she and her husband had a more critical reason for starting a local workshop: to put unemployed farmers back to work.

After the end of the First World War American farmers found themselves struggling to survive due to surpluses and depreciating prices. As debts rose and foreclosures became rampant, the nation entered an agricultural depression that persisted throughout the 1920s. With agriculture being so vital to Dutchess County’s economy, both Roosevelts watched in alarm as farmers relocated to cities and abandoned their land. Discussing the reasoning behind Val-Kill Industries, Eleanor wrote, “If it were possible to build up in a rural community a small industry which would employ and teach a trade to the men and younger boys…I felt that it would keep many of the more ambitious members in the district.”

Italian craftsman Frank Landolfa was hired in the winter of 1926 to construct the initial pieces. Val-Kill Industries’ first customer was none other than Franklin DD. Roosevelt, who was in the process of furnishing his cottage in Warm Springs, Georgia. His mother, Sara, furnished the James Roosevelt Memorial Library in Hyde Park with furniture from the shop. Henry Morgenthau, Jr., a Hudson Valley neighbor who would serve as Secretary of the Treasury in the Roosevelt Administration, also placed a substantial order.

In the summer of 1927, the first exhibition took place at the Roosevelts’ New York townhouse. Frank Landolfa produced butterfly drop-leaf tables, mirrors, a replica of a masterful walnut table on display in the Metropolitan Museum of Art, and elegant Cromwellian-style chairs. The debut generated more sales than originally estimated, resulting in the hiring of additional craftsmen to meet the demand, most notably a Norwegian immigrant named Otto Berge. Even with additional hands, the workers remained overwhelmed. During that first year, Eleanor remembered how hard it was “to instill into the minds of the workmen that what was expected of them was craftsmanship, not speed.”

One of the reasons behind Val-Kill Industries producing more simple, traditional furniture was to keep costs as low as possible. Had they created ornate pieces in the Queen Anne style, expenses would have risen dramatically. One craftsman was responsible for producing one piece of furniture, and that included selecting the wood, cutting it, and assembling the item. All the lumber was brought in from Ichabod T. Williams & Sons in New York City.

Nancy Cook oversaw the employees’ production, even requesting that they detail in their time-sheets how long it took to complete one piece. She developed a precise system for the finishing process that entailed at least fifteen steps, ending with the imprint of the Val-Kill Industries stamp. For furniture made especially for the Roosevelts’ friends and family, a stamp of Eleanor Roosevelt’s signature was placed. Many of the local boys hired were placed in the finishing room. 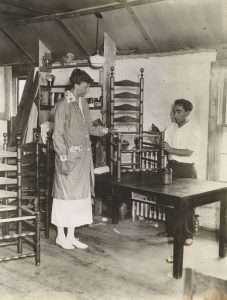 With the nation in grips of the Great Depression, the shop prepared for a decline, but 1930 turned out to be a peak year. As interest in the American Colonial Revival Movement grew, Val-Kill Industries expanded its factory and hired additional cabinetmakers and workmen. Eleanor was always a steadfast customer, and when the Roosevelts moved into the White House in 1933, several furniture pieces sent from New York to Washington, D.C. were made at Val-Kill Industries. As first lady, Eleanor took advantage of the numerous ways presented to her to market the shop, even writing articles for publications like House & Garden Magazine.

Slowly, the Depression took its toll and sales declined. There had been discussion about opening a forge, but the plan was delayed because of the economy. Finally, in 1934, Arnold Berge, Otto’s brother, was recruited to run the new Val-Kill Forge. In the spring of 1935, another exhibition was held at the Roosevelts’ New York City residence, this time displaying their first pieces of pewter. The Val-Kill Forge went on to produce items such as mugs, bowls, pitchers, candlesticks, plates, and lamps.

Yet by the end of that same year, it was apparent that Val-Kill Industries was sinking. As the number of orders dwindled, workers were let go. After eight years as the head craftsman, Frank Landolfa left the workshop for a more secure job. Otto Berge agreed to stay until all remaining orders were complete. Val-Kill Industries reached its final days in 1938. Eleanor transformed the workshop into her own private cottage, and it remained her main home until she died in 1962. Eventually, Marion Dickerman and Nancy Cook vacated the Stone Cottage, and the Roosevelts’ youngest child, John, moved in with his family.

After Val-Kill Industries officially closed, Otto Berge obtained the equipment and the right to use the name. His brother, Arnold, ran the Val-Kill Forge in his home until the United States entered World War II. Eleanor continued to be a devoted customer, often ordering pewter pieces from Arnold to gift to her friends. In her “My Day” column dated July 3, 1940, she wrote of Otto making her an oak lectern “for me to send to an Indian church out West.” 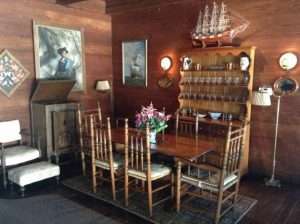 Although Val-Kill Industries was not a great commercial success, its influence should not be overlooked. During a period when New York farmers were struggling to provide for their families, Val-Kill Industries offered them an opportunity to apply their skills and generate income.

Several New Deal initiatives, especially the Works Progress Administration (WPA), enacted programs that focused on the revival of the American Arts and Crafts movement. At the same time, these programs boosted the morale of a nation in despair, just as Val-Kill Industries did on a local level.

Franklin D. Roosevelt famously said, “It is common sense to take a method and try it: If it fails, admit it frankly and try another. But above all, try something.” Val-Kill Industries was a testament to the Roosevelts’ core belief that the only way to improve the adverse economic situation was through action.

Holley Snaith is a historian specializing in 20th century United States history. Holley has interned at the FDR Library and worked with the National Park Service on a historical restoration project at Val-Kill. She also served as the program manager for the Girls’ Leadership Worldwide Program at the nonprofit Eleanor Roosevelt Center. Visit www.holleysnaith.com to learn more.