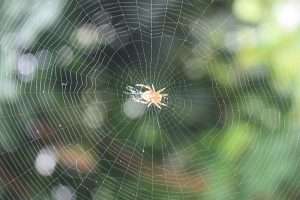 One neighbor calls our house “the spider house” because so many orb weavers spin webs outside our large living room windows. Our spiders work on their webs at dawn and dusk, and I watch their silhouettes against pastel skies as they move like aerialists – twisting, pulling, building, repairing.

The orb web, with its two-dimensional, radiating geometry, is the iconic spiderweb. But various spider species spin different web types, ranging from simple to complex. These include aptly named triangle webs, as well as funnel webs that sparkle with morning dew in lawns and fields, and myriad three-dimensional tangle or cobwebs, which have been compared to galaxies in their structural complexity.

Most frequently, a spider builds a web as its home, as its primary tool for catching food – or, often, as both. Usually females settle down to spin while males wander in search of mates. Scientists have closely studied a few web-building behaviors, including those of orb weavers and cobweb creators.

Orb web construction requires four different silk building materials and follows recognizable stages. The frame of the web is made from super-strong silk anchored by a second cement-like silk. A spider will start with a proto web of a few threads, then spin the radial threads that create the web frame. Next, the spider adds a temporary auxiliary spiral, which stabilizes the web, allows the spider to cross between radii as it continues to build, and guides the placement of the final capture spiral.

The capture spiral – used, as its name suggests, to capture prey – generally comprises an extra stretchy silk coated with a second silk glue. Some spiders, however, use a wooly silk that sticks to insects like fuzz on velcro. Once a spider has committed to building a web, it takes about an hour to finish.

Research by Andrew Gordus of Johns Hopkins University has shown that spiders are constantly assessing their webs for errors and will backtrack to previous construction stages to make adjustments, often necessary when building in unpredictable outdoor environments.

Gordus compares web building to dance choreography, noting, however, that, “Ballet isn’t performed in a vacuum. There’s sensory input: the music.” For spiders the “music” is their silk, and they’re constantly listening with their legs. Partly this listening is literal, as spiders use their webs to detect vibrations transmitted through the silk. But they are also “listening” to the web by paying attention to how well it functions. A damaged or poorly built web must be improved or that spider risks going hungry – or getting caught by other predators. 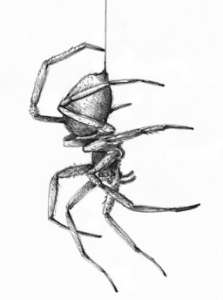 Just as a dance can have sections defined by characteristic moves, the stages of orb web building are characterized by specific actions. When spiders make the radial threads, they walk in and out from the web center. When they build the inner spiral, they repeat a particular silk-anchoring behavior. Their legs, which handle the silk, also have distinct gestures at each stage.

Spiders that build three-dimensional tangle webs – commonly called cobwebs – also follow recognizable construction stages. As Markus Buehler and Wei Lu of MIT explain, spiders building this type of web first create a rough outline of the web, which includes key anchoring points, using the super-strong silk. Once those are established, the spider further develops the web, which may include elastic threads and sticky booby traps. Within two days, the spider has a web with all the primary functional architecture, but they continue to improve and repair over time. Like orb web builders, cobweb builders are constantly listening to their webs.

The duration a spider keeps a web varies. Some will repair and reinforce a web over extended periods, while others will build new every night. Exemplary recyclers, spiders often eat their old silk to reuse it. The orb weavers outside our living room window tend to keep a web for several days before consuming the old web and spinning a new one. On the other hand, the American house spider on my bathroom windowsill has essentially maintained the same web for months, extending it as she grew bigger and repairing it when I’ve moved a supporting object.

Regardless of what type of web they weave, I find spiders fascinating and agree with Gordus, who told me, “Spiders are wonderful creatures! Most are harmless. They’re eating so many things around the house that we don’t want.” Given the number of webs around my home, it seems my house is being well-kept by these tiny, web-spinning guests.