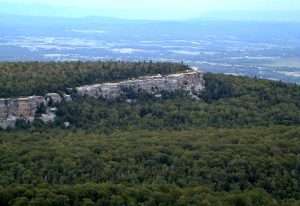 A 54-year old New York City man was rescued after falling into a deep crevice in a New York State Park, according to Department of Environmental Conservation Forest Rangers.

The incident occurred on Saturday, October 22nd, at Minnewaska State Park, a 22,275-acre preserve located on the Shawangunk Ridge in Ulster County.

The park is noted fro its scenic views of the nearby Catskill Mountains and is a popular place for picnicking, hiking, mountain biking, snowshoeing and swimming. Minnewaska State Park is managed by the New York State Office of Parks, Recreation and Historic Preservation (State Parks) and the Palisades Interstate Park Commission. 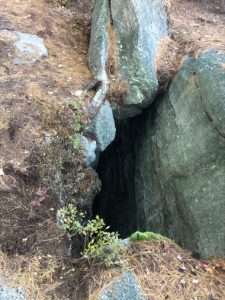 DEC said that New York State Police requested Forest Ranger assistance at about 2:22 p.m to hoist the man, who had fallen about 50 feet into a crevice near Gertrude’s Nose, one of the Park’s prominent cliff-faces, located in the town of Gardiner.  Staff from State Parks and local responders raised the man with a high angle rope rescue. He had suffered a significant head injury and was in and out of consciousness.

Rescuers then carried him a half-mile to Gertrude’s Nose where they were met by Ranger Lieutenant Slade and Ranger Jahn. The Rangers loaded the man into an aviation litter and at about 4 pm, with New York State Police pilots Bowe and Leeder flying, Ranger Stratton hoisted the patient into the helicopter.

The man was then transferred to a Life Flight helicopter and taken to the hospital.

Photos: Above, Gertrude’s Nose seen from Hamilton Point in the Minnewaska State Park (courtesy wikimedia user Mwanner) and below, the crevice from which the man was extracted (DEC Photo).