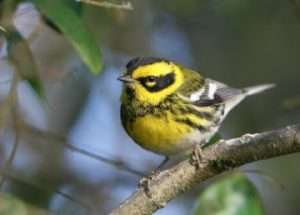 The journeys of night-migrating birds are already fraught with danger. Light pollution adds yet another hazard beyond the increased risk of collisions with buildings or communication towers. According to a new study, birds attracted by the glow of artificial light at night are drawn into areas where they are also exposed to higher concentrations of airborne toxic chemicals. The study has just been published in the journal Global Change Biology.

The only time that did not reveal increased exposure to toxic chemicals was during the breeding season when songbirds typically nest in habitats away from areas of intense human activity.

The researchers first compared levels of artificial light at night with the presence of 479 toxic chemicals from 15,743 releasing facilities across the continental United States. They found that higher light pollution did correlate with higher levels of airborne toxic chemicals. The scientists then cross-referenced these data with the weekly abundance of 165 night migrating songbird species throughout their annual life cycles, using data from the Cornell Lab’s eBird program.

Studies have shown that air pollution has caused some species to stop migrating, change migration altitude, or alter their course. Long-term exposure to toxic chemicals can interfere with cell and organ function, and contamination can carry over to young through the transfer of chemicals from a nesting female to her eggs.

In total, the study shows that observations provided by volunteer eBird participants are allowing scientists to better understand the full range of implications of light pollution for night-migrating birds.

Illustrations, from above: Townsend’s Warbler courtesy Cornell Lab of Ornithology; and comparison map (a) shows the total concentration of ground-level airborne toxic chemicals and (b) shows the radiance of artificial light at night within the contiguous United States for the year 2020 courtesy Global Change Biology.