On November 11th, 1918, German delegates signed the armistice formally ending the “Great War,” four years of killing and unprecedented – at least at the time – mass destruction.

Lake George resident Arthur Knight, who within a few years would become editor of the Lake George Mirror and serve in that capacity until 1969, was among the two million Americans who, in answer to their nation’s call, joined the American Expeditionary Force to fight on the side of Britain and France and their allies.

Margie Mannix, official historian for the Village and Town of Lake George and, co-incidentally, Art Knight’s grandniece, recently came upon a letter Knight wrote to one of Lake George’s leading citizens, Mary Hubbell, a few months after the armistice was signed. From an American base in France, he wrote:

“I was up on the front the last day of the war and stood near two big naval guns north of Verdun as they sent their last two big shells screaming into Germany at exactly one minute to eleven.

“As soon as the last two shots had gone over, all the church bells in Verdun were turned loose and such a noise you never did hear.

“The French were all very happy and singing and shouting to us ‘Vive l’Amerique! Brave Americaines!’

“That night all nationalities joined in and there was a grand celebration in Verdun. We had a celebration down at our aerodrome too and shot off a large number of colored lights, rockets, etc. We also turned loose all the machine guns and rifles we could get our hands on and it was about as dangerous around here as it had been up in the first line trenches.”

Art Knight concludes his letter by stating, “I hope Lake George has a very prosperous year and that I will get back in time to share some of the beauties of the summer time. My regards to all Lake George folk, and the very heartiest thanks for the many things that Lake George has done for me.”

Were it not for the unique beauty of Lake George, it is unlikely that Knight would have returned to the Village and edited the Lake George Mirror. He wrote:

“I received a letter from Dad the other day in which he spoke about what my future work should be. He does not think that I should tie myself up to the Mirror and what little future there is to the newspaper game at Lake George. I don’t think so either, but anything else means giving up Lake George and I do so hate to break away from the place. I really don’t think that I could be contented anywhere else. I have hoped and hoped that big business would be interested in Lake George as a larger summer resort and also as a big winter resort, but I guess that my hopes in that respect will not be very lucky.”

Knight’s father was Edward A. Knight, an Essex County newspaper publisher who purchased the Lake George Mirror in 1907. After publishing the newspaper for ten years, he appears to have decided that it offered little scope for a young man of Art Knight’s talents and interests.

Art himself appears to have found what he believed to be his true calling while serving with the American Expeditionary Force: an airplane mechanic. He writes: 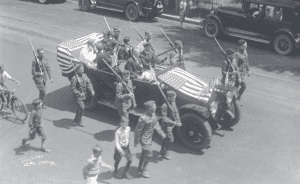 “I imagine that if the government should offer something in the aeroplane line to be gotten by competitive Civil Service examination that I will go in for an aeroplane mechanician as I am confident that I could pass all of the tests. I can almost take an aeroplane apart and put it together again in the dark now.”

However, that was not to be. After returning from Europe, Knight enrolled at Columbia University. In 1920, while still an undergraduate, his father was stricken with an illness that killed him within a year. He was only 52.

Art Knight returned to Lake George and took over the reins of the Mirror. In 1928, he created Adirondack Resorts Press, which became the region’s leading publisher of vacation brochures, maps, signs, post cards and stationary.

If he regretted “tying himself up with the Mirror and the newspaper game at Lake George,” he never said so. Rather, he worked hard to make Lake George “a larger summer resort,” supporting the construction of the Million Dollar Beach, the Northway and the Prospect Mountain Highway, in addition to promoting the region in the columns of the Lake George Mirror.

He retained his interest in aviation and dedication to duty, joining with other World War I veterans to establish American Legion Post 374 and serving as a Lake George air warden during World War II.

Photos of parades in Lake George Village featuring veterans of World War I and American Legion Post 374 courtesy Historical Society of the Town of Bolton.