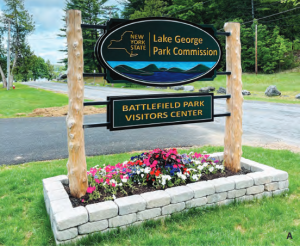 The Lake George Battlefield Park Alliance has announced they will be conducting guided tours looking at the Park’s unique history as a key site in the French and Indian War and the American Revolution as part of New York State’s “Path Through History Weekend” on October 8th at 11 am and October 9th at 1 pm.

The Alliance, formed in 2001 to help preserve the site and educate the public on its importance to American history, is providing trained tour guides who will point out the ruins of Fort George (constructed in 1759), the burial place of four unknown soldiers who were killed in the Battle of Lake George (1755), the Park’s historic statues and what they commemorate, and the remnants of hospitals and kilns that served soldiers during the two 18th century conflicts, among other noteworthy areas within the Battlefield Park.

The Lake George Battlefield Park Visitor Center will be open during each day of the long Columbus Day/Indigenous Peoples Weekend, from 10 am to 4 pm. The Center features artifacts and exhibits that connect to the site’s storied history.

Tours will last one hour and will begin at the Lake George Battlefield Park Visitor Center, located at 75 Fort George Road in Lake George, Warren County, NY. Pre-registration is recommended and can be completed by emailing info@lakegeorgebattlefield.org.

Photo: entrance to Visitor Center on Fort George Road; during the 19th century, the ruins of Fort George were a tourist attraction.