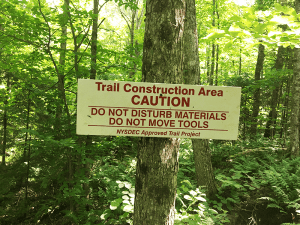 2022 may end up as the year some of the most important reforms in New York State Forest Preserve management were started, both in practice and in theory.

Forest Preserve management reform has been a long time coming as the NYS Department of Environmental Conservation (DEC), which is responsible for the care and custody of the Forest Preserve, has struggled for years with how to improve its overall management program.

Small changes have been attempted at various points, but no major reforms have been successfully brought to the DEC’s Forest Preserve management.

As this fall’s box-of crayon colors blossom across Adirondack Park mountainsides, hillsides, and shorelines, reform is mixed in the air with the first autumn chills. This is the first article in a three-part series that looks at nascent Forest Preserve management reforms underway at the DEC.

This moment in Forest Preserve history demands reform. Reforms don’t come easy to a massive bureaucracy like the DEC or to small insular agency like the Adirondack Park Agency (APA). This reform moment was driven by two forces. The first was historic high recreational use of the Forest Preserve over the last decade, which amplified and exposed historic weaknesses in the state’s management, and at many points overwhelmed the state’s management. Problems were plain for all to see.

The second was the 10-year-long lawsuit by Protect the Adirondacks to defend Article 14, Section 1, the famed “forever wild” clause of the State Constitution, started in 2013. In this lawsuit the state’s highest court ruled that the DEC and APA had violated the forever wild clause of the NYS Constitution. This lawsuit was launched after more than a decade of both agencies repeatedly pushing Forest Preserve law to the breaking point.

The first major reform to note involves efforts by the DEC to improve its openness and transparency around Forest Preserve management. This has been a challenge for an agency that often treats Forest Preserve decision-making and management activities as national-security secrets. Public lands, bought and managed with public funds, and principally managed for public recreation, as a rule should be 100% public in their management. For far too long DEC’s public lands management has been done in secret.

This summer, DEC began posting State land “Work Plans” on its website, an important step forward on the path to improved public disclosure. In the past, a Forest Preserve management activity, such as a trail relocation, lean-to construction, or a campground infrastructure improvement such as a new waterline, among many others, was posted in the Environmental Notice Bulletin (ENB).

These notices included information about the nature of the project, location, Unit Management Plan, among other things. Yet, there was no public comment period, and no Work Plan was provided. Anyone who wanted more information had to track down the appropriate DEC staff person, who sometimes provided the Work Plan and at other times asked that a Freedom of Information request be filed to get it. It seemed that these Work Plans were final as the DEC was not really seeking public input, but just checking the legal box to publicly notice them.

This all seemed unnecessarily complicated and hardly in keeping with a spirit of openness and transparency in Forest Preserve management.

This year, DEC changed its process. DEC now posts actual draft Work Plans on its website and links to them from its ENB notices. These Work Plans are real drafts, not finals, and public comment is solicited with dates and contact information for commenting purposes. I hope that the DEC will continue to list completed final Work Plans on its website as a public resource, where final plans will be warehoused, organized by DEC Region and year going forward. These are important steps in the interest of public disclosure and accountability in the management of public lands.

Recently, Protect the Adirondacks submitted a detailed letter to the DEC that enumerated a number of ways that the Work Plan template should be improved. We believe that these changes will improve the veracity of the DEC’s evaluation and planning of Forest Preserve management activities, no matter how small or big. Our suggestions also detail the legal requirements for an assessment of compliance with Article 14.

DEC should make some changes to provide better information on the proposed activity, identifying whether the project is trail work, campsite work, a boat launch, a parking lot, etc., among other activities. We commend the DEC for adding in new sections to assess “alternatives” and a long section for the “Project Description/Justification” that provides the DEC with the opportunity to fully describe and explain a proposed project in plain English. Inclusion of these sections is good practice.

We support the inclusion of other sections to Work Plans like assessments for “earthwork and disturbances, including work outside of trail corridors.” We support the analysis of alternatives, impacts to wetlands, and impacts to rare, threatened, and endangered species and species of special concern. We support requirements that assess the use of motorized equipment and motor vehicles as well as contact information for the DEC staff who are in charge of the project.

The major weakness of the current Work Plan template is the section on “Trees to be Removed.” This section needs revision to include a full-fledged legal analysis of any proposed management activity for compliance with Article 14.

The destruction of timber on the Forest Preserve is an important constitutional consideration, governed by four major decisions by New York State courts that interpreted Article 14. Those decisions make clear that tree cutting is just one of several factors in determining compliance with Article 14. The heading for this section should be changed to “Constitutional Compliance” or “Article 14 Compliance” in order to more accurately reflect the full range of factors that must be considered by DEC in assessing compliance with Constitutional mandates governing the management of the Forest Preserve.

The criteria that the DEC Forest Preserve managers must use to assess Article 14 compliance are found in the four historic Article 14 decisions. The 2021 “Protect” Court of Appeals decision builds upon the 1930 “MacDonald,” 1993 “Balsam Lake,” and 2019 Appellate Division “Protect” decisions. The 2019 and 2021 Protect decisions require that the assessment of Constitutional compliance for a proposed Forest Preserve Work Plan must consider six principal factors.

First, is the question of whether the purpose of the project is a permissible one under the Constitution. This, of course, is a threshold question. For instance, the Court of Appeals has found that a bobsleigh run and snowmobile trail whose purpose is to connect communities are not permissible purposes for projects in the Forest Preserve. Likewise, roads, alpine ski centers, and bike lanes along roads have required constitutional amendments. Camping, hiking, and cross-country skiing have been found by the courts to be permissible purposes for trail construction and tree cutting in the Forest Preserve.

Second, is whether the cutting, removal or destruction of trees associated with the Work Plan is “material” or “substantial.” Tree cutting has historically been used as a principal factor in Article 14 case law and DEC management because it’s an objective measure that can be quantified. Trees or stumps can be accurately counted. Thus, the courts can rule on whether “the timber thereon” was “sold, removed or destroyed.”

The Protect decisions ruled that all trees greater than 1-inch DBH (diameter at breast height as measured 4.5 feet from the ground) are constitutionally protected “timber.” This provides an important clarification to guide DEC’s tree cutting and removal analysis.

The 1930, 1993, and 2019 Article 14 decisions focused heavily on tree cutting. The 1930 MacDonald decision introduced the test that any tree cutting for State management projects must not be “material” or “substantial.” Subsequent cases have helped to define the permissible levels of tree cutting. That said, tree cutting is but one of six factors that must be analyzed.

The third and fourth factors could be assessed together, as they’re intertwined. Third, is whether the impact of the proposed activity on the existing “wild” state of the Forest Preserve is constitutionally permissible. Fourth, is whether the project requires greater interference with the natural development of the Forest Preserve than is necessary to accommodate hikers. In many ways these two new factors, passed down from the state’s highest court, represent the biggest changes to the DEC’s Forest Preserve management and may be their biggest challenges going forward.

Tree cutting, of both big and small trees, was at the heart of the MacDonald and Balsam Lake decisions. Before the Protect case, the courts had not focused as much on other parts of the Article 14 clause, such as the requirement that the Forest Preserve “be forever kept as wild forest lands.” However, in the 2021 Protect decision, the Court of Appeals recognized that the “forever wild” protections of Article 14 extend beyond prohibiting the cutting of trees. In Protect, the Court of Appeals affirmed the MacDonald tree cutting tests of “material” and “substantial,” but went further in clarifying that tree cutting is just one of several factors that need to be evaluated in determining compliance with the “forever wild” clause.

“defendants and the dissent contend that the project’s impacts are justified because it enhances access to the Preserve and provides a variety of recreational opportunities. That analysis proceeds from a fundamental misunderstanding. The constitution provides for access and enjoyment of the Forest Preserve as a wild forest: “very considerable use may be made by campers and others without in any way interfering with this purpose of preserving them as wild forest lands.” (p. 11)

Fifth, is whether the level of alteration of the existing Forest Preserve terrain is constitutionally permissible. The Protect decision also established a new standard for trail width, an important factor that led the Court of Appeals to find Class II snowmobile trails to be unconstitutional. Class II trails were designed to have a 9 to 12 foot wide flat tread area, with a disturbed area that was often 12 to 20 feet in width. The Court stated “The [Class II] trails may not be built like roads for automobiles or trucks, but neither are they constructed as typical hiking trails.” (p. 10)

Additionally, the Protect decision described other factors that contributed to the unconstitutionality of the Class II trails, such as “bench cuts—cuts into sloped ground and removal of the cut soil, rock and trees to create a ‘bench’ upon which a trail can be placed—require clearing the land on the up- and down-slopes of the trail, resulting in the clearing of the forest floor up to 20 feet in width in certain areas—a span wide enough to site a two-car garage.” (pp. 10-11) The Court found such massive cuts to violate the mandate that the land be “forever kept as wild forest lands.” The court also referenced “grading and leveling” and the “removal of rocks and other components” as factors that may render trails constitutionally impermissible.

The total width of a trail corridor, and the changes to the terrain within that corridor, will need to be assessed in the future. Thus, to the extent that a Work Plan calls for changes to the existing Forest Preserve terrain, those changes must be carefully scrutinized in light of Article 14’s constraints.

Work Plans need to embrace the full scope and reality of Article 14 case law. Tree cutting alone is no longer a viable assessment standard. Now we’re in a brave new world where the DEC and APA must embrace a more expansive legal analysis to determine constitutional compliance of a proposed action. This reform will be a challenge for the DEC and APA, but it’s the legal reality going forward.

Revision of Work Plans and public information around Forest Preserve management activities is a start, but there’s a long, rocky, rooted, eroded, braided, widened, and muddy trail of reform ahead that needs fixing. The next two articles in this series will focus on new efforts to manage public use, sustainable trail design, construction and standards, permits, and ecological assessments to evaluate public recreational use impacts on the Forest Preserve.