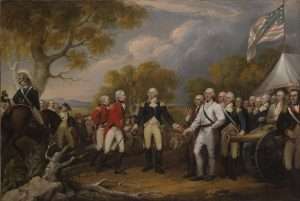 Over the years, much has been written about the Freemasons (or Masons) involved in the American Revolution, including George Washington, Benjamin Franklin, and Paul Revere. Freemasonry is a voluntary self-betterment association that teaches moral, intellectual, and spiritual lessons through theatrical initiation ceremonies.

It was the preeminent fraternal organization in the 18th century, especially in American, English, and French cities and ports as the political, commercial, and intellectual elites gathered within a lodge or meeting.

The Battles of Saratoga, America’s “turning point of the Revolution” ended with the victory of the American army of General Horatio Gates over British forces commanded by General John Burgoyne on October 17th, 1777. Historians have always pointed to Saratoga as one of the most significant battles in the world history, in part because it led to a transfer of vast territory and far-reaching influences. Saratoga’s capitulation triggered two centuries of revolution elsewhere. It ushered in the end of the British Empire and brought the United States of America to life.

There were many freemasons involved in the American victory, but probably none as important as Benjamin Franklin. Franklin was not on the field of battle but in France, helping build support by getting French Masons to help the American Revolution. One of his tools was the Lodge of the Nine Muses — the intellectual center of French Freemasonry. Franklin was admitted into the Nine Muses and was elected Master of the Lodge. He devoted himself to a propaganda campaign that leaned French public opinion in favor of the American cause. A clandestine method to secure and deliver military supplies to rebel forces in America was designed and implemented.

In the spring of 1777, a shipment of French military material bought by the United States arrived at Portsmouth, New Hampshire. It included 1,000 barrels of powder, 12,000 muskets from Charleville, thousands of blankets, and other military articles. These supplies helped enable the American victory at Saratoga in the autumn of 1777.

“The Surrender of General Burgoyne” was painted by John Trumbull and is on the exhibition at the rotunda of the United States Capitol. The painting depicts the sword surrendering at the end of the battles of Saratoga. There are 27 people in the picture, 20 of them Masons (though not all of them were members of the fraternity before the battles).

Three of the masons would become governors: John Brooks of Massachusetts; Morgan Lewis, third governor of New York; and William Hull of the Michigan territory. Morgan Lewis (1754-1844) was the son of one of the signatories to the Declaration of Independence, Francis Lewis (1713-1802). Lewis had an extensive military career as Chief of Staff to General Horatio Gates and Quartermaster General of New York State during the Revolutionary War. He was also the United States quartermaster general in the early days of the War of 1812. He later served as brigadier and then major-general on the Niagara frontier and commanded the battle of Fort George. Lewis sat in the New York State Assembly and Senate and was Attorney General and Chief Justice of the State Supreme Court. Lewis County in New York goes by his name. He served as Grand Master of the Grand Lodge of New York from 1830 to 1843.

The Master’s Masonic Lodge in Albany awarded degrees during the war, including initiating Morgan Lewis and making Master Masons of Henry Dearborn, John Stark, Robert Troup, and James Wilkinson. The Albany lodge was visited by John Greaton. The provincial Grand Master issued a charter to “Union Lodge No. 1” in Albany dated February 21st, 1765. On April 12th, 1768, the cornerstone of the new Masonic building was placed at the intersection of what became the northwest corner of Lodge Street and Maiden Lane.

During the eight-year war, there were traveling military lodges, American Union and Washington Masonic, that were convened at the American army’s encampment and were frequented by Brooks, Hull, Rufus Putman and Thomas Seymour

The St. John’s Lodge in Portsmouth, NH, was the home lodge of Henry Dearborn, Alexander Scammell, and William Whipple (who also signed the Declaration of Independence). Joseph Cilley was a member of a nearby lodge in Lee, New Hampshire. St. John’s Lodge is the oldest Masonic lodge in New Hampshire and claims to be the oldest active Masonic lodge in America. The lodge convened and formed the Grand Lodge of New Hampshire in the William Pitt Tavern, which is now part of the Strawbery Banke Museum.

John Armstrong’s home lodge was in Pennsylvania. Massachusetts’ lodges were the home of John Glover, Elnathan Haskell, Enos Hitchcock, and William Lithgow. Matthew Clarkson’s lodge was the famed Holland Lodge in New York. The Holland Lodge was founded in 1789 and initially used Dutch as its primary language.

The Battle of Saratoga was the first time an entire British army was captured. More importantly, the victory gave Franklin some good news to convince the French to join the effort. When the French entered the war, what was only a North American war became global, with battles in India, Africa, Europe, and the Caribbean. It took another five years, but in the end, Saratoga made the words written in the Declaration of Independence an excellent achievement for all humanity. It is not surprising that the masons, members of the preeminent fraternal organization in the 18th century, were involved.

Painting: The Surrender of General Burgoyne at Saratoga – John Trumbull.