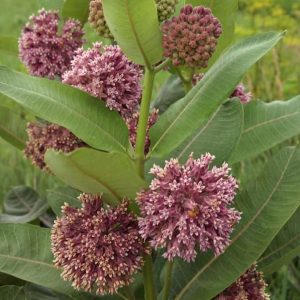 During a late summer walk, I noticed that the common milkweed in our back field is becoming not-so-common. Once vigorous patches of the milky green plants have dwindled, engulfed in a sea of Canada goldenrod.

Goldenrod is a habitat rock star, and during this walk, I counted at least 13 moth, wasp, butterfly, fly, and bee species nectaring on the bright yellow flowers. But for those of us who worry about monarch butterflies, common milkweed (Asclepias syriaca) and other milkweed species get preference of place. As the obligate hosts of monarch caterpillars, the plants are linked to the fate of one of our most beautiful and threatened summer visitors.

My family has previously tried to spread milkweed by shaking ripe seed pods to promote windborne dispersal. This is a fun activity, especially for little kids, who delight in watching the masses of fluff-attached seeds billow around them. However, it hasn’t seemed to help local milkweed populations. So this September, I decided to get serious and seek out expert advice.

Anna Fialkoff, ecological programs manager at the Wild Seed Project, explained that my milkweed patches’ decline is a natural part of plant succession – and that this progression is complicated by the widespread presence of European cold season grasses and other alien plants that out-compete native species.

“The species that are taller and a little bit more pushy tend to take over eventually,” Fialkoff said. “It’s hard to have native meadows that are dominated by our native grasses and wildflowers unless we make a concerted effort to do so.”

Rather than seek to regenerate milkweed over the whole field, Fialkoff suggested taking a page from the forestry practice of creating uneven age stands as a way to enhance biodiversity.

Mowing some areas and leaving others untouched on a two-or-more-year cycle can help native bees, which use second-year dried stems of Joe Pye weed, flowering raspberry, and other woody-and semi-woody plants, both for adult hibernation and as protected chambers for eggs. Localized wildflower diversity also provides more reliable nectaring for many species across the spring and summer months. Goldenrod, for example, nourishes migrating monarchs and other late-season pollinators, long after milkweed flowers and most other wild blooms have faded.

To establish a new patch of milkweed, Fialkoff recommended first considering which milkweed species is best suited to growing conditions. Common milkweed, which spreads vigorously by the roots and is tolerant of a wide range of soils, is the obvious choice for fields, and can be harvested guilt-free from the wild, without risk of depleting native populations. Other species grow in tidier clumps. Poke milkweed is a good choice for shady spots, and swamp milkweed works well in sunny, moist ground. For well-drained sunny spots, butterfly milkweed – native to the Northeast but rare in most of the region – is a good choice.

Regardless of species, Fialkoff suggested a tandem process of preparing the ground while germinating the seeds. This autumn, mow the desired patch site low to the ground, and then “sheet mulch” the grass and other existing plants with a thick, overlapping layer of cardboard. On top of the cardboard, spread 4 to 6 inches of aged bark mulch or composted leaves. Over a few months, Fialkoff said, this process will produce “really great, organic matter that’s going to break down and smother the weeds below.”

Meanwhile, start the seeds. Common milkweed pods ripen between now and mid-October and are ready to harvest when they begin to split open. Look inside, and you should see that the seeds at the bottom of the pod – and attached to silky hairs that extend to the top – are a dark brown, versus an unripe light tan.

Sow the seeds between mid-November and February in small pots, placing multiple seeds on top of, not in, compost-rich potting soil. Yogurt containers work well for this, as long as you add drainage holes. Sprinkle about 1/8 of an inch of coarse sand on top, and then cover the pots with hardware cloth or other screening to protect the seeds from rodents. Put the pots outside, exposed to the winter weather.

Sprouting time is variable, ranging from early to late spring. When the seeds sprout, put the pots in a spot with partial shade, and keep the young plants well watered. In early autumn, transplant them into the sheet-mulched soil. Keep watering the plants until they are well established, and occasionally mow around the new patch to prevent competitors from pushing in. With luck, you’ll provide a home for monarch caterpillars and other native insects for years to come.

Elise Tillinghast is the executive director of the Center for Northern Woodlands Education. Photo of common milkweed courtesy Wikimedia user Amos Oliver Doyle. Illustration by Adelaide Murphy Tyrol. The Outside Story is assigned and edited by Northern Woodlands magazine and sponsored by the Wellborn Ecology Fund of the New Hampshire Charitable Foundation.