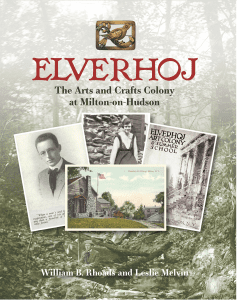 The Marlborough Historical Society of New York will host a presentation by authors William B. Rhoads and Leslie Melvin on their recently-published book entitled, Elverhoj: The Arts and Crafts Colony at Milton-on-Hudson (Black Dome Press, 2022; distributed by RIT Press), on Sunday, October 23rd at the Milton Train Station in Ulster County, NY.

Elverhoj (Danish for “hill of the fairies,” pronounced “El-ver-hoy”) was an Arts and Crafts colony established in Milton on the picturesque west shore of the Hudson River in 1912 by Danish American artists and craftsmen led by Anders Andersen. Little known today, the colony achieved a national reputation before World War I and earned a gold medal at the 1915 Panama-Pacific Exposition in San Francisco. That same year, a write-up in Gustav Stickley’s Craftsman magazine with photos of the rustic studios added to the colony’s growing fame.

Elverhoj was especially regarded for its jewelry and metalwork, but the works of painter-craftsman James Scott and etcher Ralph Pearson added to its renown, as did a fruitful connection with nearby Vassar College, strengthened by the efforts of colony members Bessie and Henrietta Scott, sisters talented in textile arts.

There will be a book signing after the talk, and books will be available for purchase at that time.

William B. Rhoads is a professor emeritus of Art History at SUNY New Paltz. His and his late wife Sally’s interest in the American Arts and Crafts movement began thanks to their friendship with the pioneering scholar of the movement, Robert Judson Clark, at Princeton University in the late 1960s when Rhoads was a graduate student. Books by Rhoads include: Kingston, New York: The Architectural History & Guide and Ulster County, New York: The Architectural History & Guide, both published by Black Dome Press.

Leslie Melvin is an academic technologist at Bard College. After receiving her MA in art history and museum studies, Leslie worked for over a decade in academic image libraries. Local history and historic preservation are avocations: she continues to specialize in image, object, genealogical and historic house research. Leslie joined the Elverhoj research group while serving on the board of the Ulster County Historical Society.

This program will begin at 4 pm. The historic Milton Train Station was built in 1883 and is located at 41 Dock Road, in Milton, Ulster County, NY, next to the Milton Landing Park on the Hudson River. The train station was added to the National Register of Historic Places in 2007. For more information, click here.