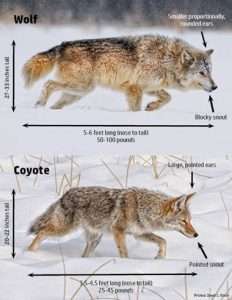 Last month, genetic testing confirmed that a canid killed by a hunter in Otsego County in 2021 was a wolf. The New York State Department of Conservation (DEC) has documented a few wolves and wolf hybrids over the last 20 years in New York.

In most cases, analyses indicated these animals were released from captivity, but wild wolves are present in portions of Ontario and Quebec, and it is possible for these animals to travel into New York. 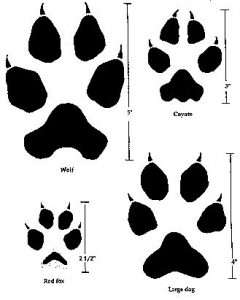 With the opening of coyote hunting and trapping seasons this fall, DEC is reminding care should be taken in identifying any large canids encountered.

Wolves can be distinguished from coyotes by their larger size (Eastern coyotes rarely weigh more than 50 pounds), proportionally smaller rounded ears, and a broader head and snout.

If you suspect that you have seen a wolf, report it to DEC. If possible, get pictures of the animal and/or its tracks, preferably with something in the image for scale.