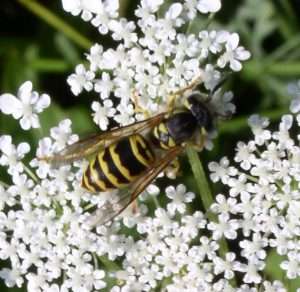 I’m not one to shed a tear when authoritarian rulers die, but once they’re gone, picnics become a lot more dangerous. As summer wanes, the original queen in every yellowjacket wasp colony dies – having a few thousand babies in the course of one season is enough to tire any Queen Mum to death.

With no one to keep the kids in line, social order disintegrates within the colony. All summer long, yellowjacket workers are busy with assigned chores like killing deer flies and tent caterpillars to feed the colony, pollinating flowers, and stinging anyone who ventures close to their nest. But once Queen Mum expires, the rank-and-file wasps are free to crash-land in your potato salad and explore the inside of your soft-drink can. They neglect their chores and go on a sugar binge. This is why yellowjackets and other colony-forming wasps seem “aggressive” in the fall – they’re gorging on sweets ’cause no one’s minding them.

Unlike honey bees, wasps can sting endlessly, so it’s good to know some defensive tactics. Wear light-colored clothing, as dark or bright colors attract them. If you’re headed to an outdoor event, forget the perfume, cologne, and strong shampoo. These products will get you more attention from wasps than from anyone you were hoping to meet. And keep your drink covered to save you from being stung on the mouth (and possibly from worse things as well).

Don’t shoo away yellowjackets, as this can provoke them. If one lands on you it’ll move on shortly, but if you can’t wait, flick rather than swat it. Once a wasp stings it releases an alarm pheromone that signals others to attack, so take cover if you do get stung.

Historically, ground-nesting yellowjackets were “managed” by pouring gas in the hole and lighting it. This was exciting, if not always effective, but we now know it can pollute groundwater. If you find a ground nest, locate the entrance. At dawn, place a large glass bowl that you just borrowed over the yellowjackets’ door. It need not fit tight to the ground, but in uneven terrain, bank sand around the rim to fill gaps. The whole colony will eventually emerge and fly circles inside a clear bowl until they die.

Please note we do NOT have Asian or so-called murder hornets! Any oversize wasps you may encounter are cicada-killers which do not make colonies, or attack humans. Take heart – yellowjackets will die with the onset of freezing weather. All except next year’s authoritarian queens that will hibernate until spring.