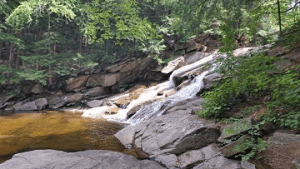 New York State Police interviewed the reporting party and confirmed the subjects were near the third set of falls. Ranger Thompson, Sheriff Abrams, and Deputy Sheriff Braunius hiked in and confirmed that a 24-year-old Kaydee B. Lyons from Albany and 28-year-old Matthew A. Bank from Scotia were deceased.

Rangers Kabrehl and Nally and Sheriff’s personnel transported litters and State Police investigators to the scene with all terrain vehicles from the Forest Rangers, Sheriff’s Department and Wells Fire Company.

The deceased were packaged and transferred to a NY State Police helicopter with the assistance of Lyme Timber Company employees. State Police investigators transferred the subjects to the County Coroner. They are investigating, but indicate the cause of death is accidental drowning.