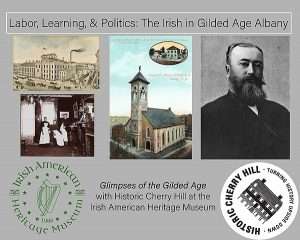 The Gilded Age was a period of gross materialism and political corruption which began after the Civil War and lasted through the turn of the 20th century.

Many Irish Americans in Albany were still struggling to support themselves, working as laborers, maids, and often dealing with anti-Catholic resentment. However, there was a growing sense of solidarity and power within the group as many were lifted out of poverty and became involved in politics and civil service.

This talk is part of the series, Glimpses of the Gilded Age with Historic Cherry Hill, and will begin at 5:30 pm. This program will take place at the Irish American Heritage Museum at 21 Quackenbush Square in Albany, NY, and will be streamed on their Youtube channel.