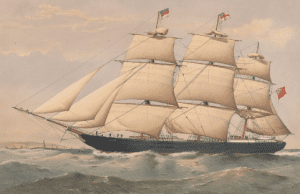 The earliest Swiss immigrants to North America were religious refugees. This group consisted predominantly of German speaking Anabaptists who began settling in eastern Pennsylvania from the mid-seventeenth century onward following a schism among the Brethren in 1693 which led to a division between Mennonites (named after Menno Simons of Friesland) and Amish (named after their leader Jakob Ammann who was born in the canton of Bern).

Most subsequent immigrants arrived for economic reasons. Between 1851 and 1880, the average annual immigration of Swiss was a modest 2,500, with families moving into Indiana, Illinois, Wisconsin, and other Midwest destinations. That number jumped dramatically when in the decade between 1881 and 1890 nearly 82,000 packed their bags, traveled to ports such as Hamburg, Rotterdam or Le Havre, and boarded steamships for America.

By the 1890s, Swiss immigration tailed off substantially. These Schweizamerikaner form a modest group within the total patchwork of immigrant communities, but their role in the formation of present-day America has been considerable.

At a time of socio-political upheaval in Europe, America proved to be a tempting outlet with transatlantic migration facilitated by fast and affordable transport. The United States were opening up. A booming economy was in need of an ever-increasing supply of labor, whilst for settlers there was plenty of cheap (sometimes: free) land to be cultivated.

Although American authorities had encouraged immigration, the nation was unprepared to handle the surge of newcomers, not just northern Europeans, but also large numbers from Italy, Greece, and Eastern Europe who escaped either poverty or religious persecution. This development led to calls for a limit to immigration combined with stricter selection. A precedent had been set in 1882 with the passing of the Chinese Exclusion Act in order to stem the tide of Asian immigrants arriving on the west coast. Ellis Island opened in 1892 in response to the overwhelming number of incomers.

The aim of the newly founded Federal Bureau of Immigration was to weed out and expel undesirable arrivals, but Swiss migrants, whether German, French or Italian speaking, were welcomed. Most of them went west to join farming communities where compatriots had settled previously. In some cases they established their own settlements with names that reminded them of home, New Glarus in Wisconsin (named after the Swiss canton of that name), or Neuchâtel in Kansas.

Not all Swiss migrants worked the land. Meyer Guggenheim, the Jewish patriarch of the Guggenheim family, settled in America in 1847 to make his fortune in mining and smelting. Others settled in New York bringing valuable skills to the city. Sixteen year old Albert Wittnauer arrived in 1872 and began working for his brother-in-law Eugene Robert, an importer of Swiss watches. Albert became a fine horologist. His company created a brand with a reputation for durability and precision. Working for the US Military, he is credited with developing the first chronometers for aviation in the early 1900s.

By the 1890s, the number of Swiss immigrants dropped to just over 30,000 and would tail off even more. In spite of the relatively low visibility of its presence in the United States, the impact Switzerland made on the nation’s history has been fundamental. Swiss merchants facilitated the slave trade by which some ten to twelve million Black Africans were transported across the Atlantic Ocean.

We tend to associate the history of slavery with European ports that “specialized” in slaving. Cadiz, Bristol, Liverpool, Nantes, and Middleburg are cities that spring to mind. The French-speaking city of Neuchâtel is situated on the shoreline of Lake Neuchâtel within the canton of the same name in the mountainous Jura region. Not a port in sight. In spite of being a landlocked country without colonies of its own, this and other Swiss cities profited from the Atlantic slave trade.

A lack of colonial ambitions helped the Swiss gain a working relationship with Europe’s main Empire builders. Swiss mercenaries were taken on by the Dutch and British East India Companies from the beginning of the seventeenth century. In 1800, when black slaves on the island of Hispaniola revolted against their French colonial masters, Napoleon sent six hundred Swiss troops to fight them.

Those amongst the soldiers who were able to access the running or exploitation of the colonial territories reaped huge rewards. Officers turned into traders. Employing African slaves as laborers, they entered the plantation business and grew sugar and cocoa beans, or traded in cotton or silk. Without cotton picked by slaves, the rise of the Swiss textile industry would not have occurred.

Trading companies such as Christoph Burckhardt’s firm in Basel or Louis de Pourtalès in Neuchâtel earned fortunes through the three-way slave trade. These and other firms laid the groundwork for the flourishing trade in commodities. Swiss individuals and companies made money out of slavery as investors and traders. The family of Alfred Escher, a major figure in the development of modern Switzerland, ran a plantation run with slave labor. 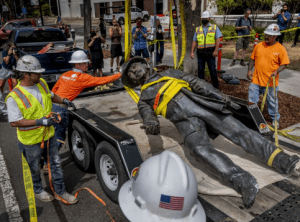 Not too long ago demonstrators pulled down a statue of General John Sutter [Johann August Sutter] in Sacramento, California. This Swiss migrant who hailed from the canton of Basel was at one time ranked as a hero of the Wild West until historians revealed that he had dealt in child slavery. And it was not just private companies that invested in transatlantic businesses. In 1719, the cities of Bern and Zurich were major investors in the South Sea Company which provided slaves to British colonies in southern America.

Trading companies boosted the development of the Swiss financial industry. On return, some successful colonial merchants ended up on the management boards of banks and insurance companies, gradually building up an expertise that was used to finance colonial ventures. Swiss banks owned a third of the French Compagnie des Indes that held a monopoly over the West African slave trade, while trading houses financed slave traders. Financial institutions invested in ships that carried Africans to the Americas.

Switzerland profited even more from imperialism than the great European powers themselves who were burdened with the costs of defending and maintaining their Empires.

Explorer Jean-Pierre Pury was born in 1675 in the Principality of Neuchâtel, a Prussian territory in modern-day Switzerland. He worked as a wine merchant before losing his wealth to a huge blaze in his warehouses. He then served as a Corporal for the Dutch East India Company which made him aware of the potential returns of colonialism. He wanted his share of those riches.

After years of campaigning in London, the British Crown granted him permission to found a settlement in the Province of Carolina. Made up mostly of Swiss Protestants, he established the Colony of Purrysburg and lived there as a planter on 12,000 acres. After his death, he was succeeded by his eldest son Charles de Pury. The latter may have been instrumental in introducing slavery on the plantation. He was killed during a slave revolt in the colony in 1754.

David de Pury was another of Jean-Pierre’s sons. Having grown up in Neuchâtel, he left for Marseille in 1725 to work as a merchant. In 1730 he was hired by the South Sea Company and became involved in the triangular trade by which arms, textiles and wine were shipped from Europe to Africa, enslaved people from Africa to the Americas, and sugar, tobacco, and other products from the Americas to Europe. His business success led to him being granted British citizenship.

In 1736 he moved to Lisbon where he co-founded a merchant bank trading Brazilian diamonds at London’s financial markets. He was also involved in removing and shipping valuable woods from the rain forest. The rape of Amazonia started early.

De Pury bequeathed a substantial part of his fortune to his home city of Neuchâtel. The funds were used to repair monuments and churches, pay for the construction of a Town Hall, build schools and hospitals, open a public library, and sponsor local charities. The city’s infrastructure was modernized on the back of slaves. Sculpted in 1848 by David d’Angers, its citizens honored their benefactor with a statue that was unveiled on Place Pury in the heart of the city.

In recent years, De Pury has become a controversial figure and his involvement in the slave trade has been acknowledged by the city’s authorities. However, history is rarely a straight-forward narrative. Neuchâtel is also associated with early calls for the banning of slavery in the French colonial Empire.

In 1770, Guillaume-Thomas, Abbé de Raynal, published his Histoire philosophique et politique des établissements du commerce des Européens dans les deux Indes (Philosophical and political history of the European trade establishments in the two Indies) in which the author predicts the arrival of a black Spartacus to free slaves and destroy the colonial system.

The book was a commercial success and went through three editions and many re-publications. It radicalized the discourse against slavery which incurred the wrath of the Parliament of Paris. Intense police censorship and the monopoly of the Community of Booksellers and Printers in the capital led to an exodus of publishers and an explosion of false imprints outside Paris. 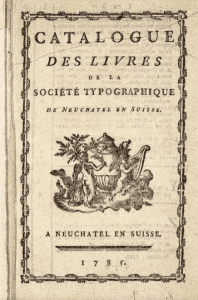 Radical French thinkers had their work printed in Geneva, Lausanne, or Basel. The Société Typographique de Neuchâtel (STN) was founded in 1769 and remained active until 1794. The city became the epicenter of the publishing and distribution of illegal, counterfeit, or banned books (at a time of growing readership in Europe). Censorship was marginal.

The authorities allowed the Society to print ‘dangerous’ works such as the Holbach’s Système de la nature, provided that the city’s name did not appear in print and that the works were destined for export. The STN became one of Europe’s largest wholesale booksellers, publishers of Voltaire and Rousseau, but also of fashionable authors such as Mercier, Mirabeau, and others. The third edition (1778) of Diderot’s Encyclopaedia, the most important work of the Enlightenment, carried the name Neuchâtel inscribed on the title page.

Between 1782 and 1784, it realized the counterfeit of Abbé Raynal’s book which became the bestseller of its time. Previously (1781) Nicolas de Condercet’s Réflexions sur l’esclavage des nègres (Reflexions on Negro Slavery) had been published under the pseudonym M. Schwartz. The Neuchâtel publishing house published and distributed numerous writings by anti-slavery campaigners, including the work of Jean-Pierre Brissot de Warville.

The latter had traveled to America in 1788/9 to visit Philadelphia, making plans to settle in Pennsylvania. An admirer of Thomas Jefferson, he was absorbed by the humanitarian ideals as expressed in the Declaration of Independence. In 1788, Brissot became co-founder and leader of the Société des amis des Noirs (Society of the Friends of Blacks) in Paris, the first French association that demanded an end to slavery.

Neuchâtel, a city that owed much of its prosperity to the Atlantic slave trade and the illegal book production of counterfeit or pirated editions, was also a force that drove the Enlightenment and the emerging abolition movement.

The paradox of the situation goes deeper. Pierre-Alexandre Du Peyrou was born into a refugee Huguenot family. His father held a high position at the Court of Justice in the Dutch colony of Surinam and made a fortune running his plantations with slave labor. The family returned to Europe in 1747 and settled in Neuchâtel. Having built a mansion in the city, Pierre-Alexandre became involved in Enlightenment circles which led to his friendship with Jean-Jacques Rousseau. Du Peyrou financed the first publishing of Rousseau’s complete works in 1788. Even the “philosopher of human freedom” is tainted by the memories of slavery.

Illustrations, from above: The Ida Ziegler, one of three Swiss transatlantic trading ships that belonged to Winterthur merchants (Royal Museums Greenwich); La Palais du Peyrou, Neuchâtel (PixHound/Shutterstock); workers remove a statue of John Sutter, a Swiss settler who built the first European settlement on the site of the city of Sacramento, June 2020; Davis de Pury’s statue in Place Pury, Neuchatel, covered in red paint by protesters, July 2020; and Catalogue of books printed by STN in Neuchâtel, 1785.