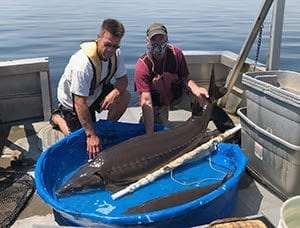 Sturgeon populations are rebounding in New York after decades of being on the threatened or endangered species lists as DEC continues to work to bring the primitive and distinctive fish back to the freshwaters of the state through strategic fish management and water quality improvements.

To celebrate the recovery of lake sturgeon, currently a threatened species in New York and the province of Ontario, DEC and NYSG teamed up to bring the public closer to these fascinating animals at events over the next few weeks. People who attend the events will have an opportunity to see sturgeon up close and learn from educators and scientists from DEC, NYSG, New York Power Authority, U.S. Fish and Wildlife Service, U.S. Geological Survey, Aquarium of Niagara, Seneca Park Zoo, and New York Sturgeon for Tomorrow who are eager to share their knowledge about the fish. 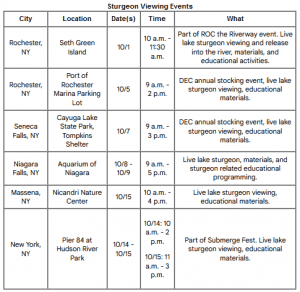 Eggs are taken from fish at Massena, NY, and raised at both hatcheries each year to enhance the recovery program. To date, the recovery program stocked more than 275,000 lake sturgeon into the Great Lakes Basin. Stocking will take place at several locations in late September and early October.

A short video about raising sturgeon at a DEC fish hatchery can be found on DEC’s YouTube channel.

An article about the recovery of all three of New York’s sturgeon species was recently published in the Conservationist magazine.