Typically, this time of year New York State’s Department of Environmental Conservation hears from people who are concerned because they are seeing deer with rough coat conditions like in the pictures shown. 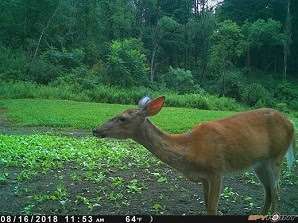 Most people are worried that their appearance might show signs of disease or parasite infestation, but in general deer that show this appearance, are in a natural process of shedding. White-tailed deer in New York shed their coats twice a year, in the spring and late summer.

Hair loss occurs in patches which gives the deer a scruffy appearance. In very rare occurrences in New York State, hair loss can occur due to parasitic infestations. However, when hair loss is caused by an infestation, other symptoms will be noticeable, such as leathery or wrinkled skin.