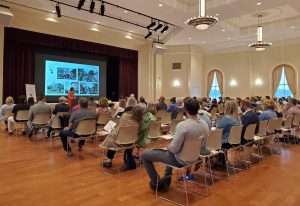 The Saratoga Springs Preservation Foundation will host their Preservation Recognition Award Ceremony at their Annual Meeting on Thursday, September 22nd.

This year the Foundation will give awards to nine projects in the city, recognizing those who have preserved the architectural heritage of Saratoga Springs, including:

To be considered for nomination by the Saratoga Springs Preservation Foundation Awards Committee, projects must meet the following criteria and considerations; must be located in the City of Saratoga Springs; but was not necessarily located in a historic district, must speak to design sensitivity and to the historic character and environment of the property; project execution must represent appropriate techniques and preservation practices; also considered is the degree of difficulty faced and appropriateness of solutions applied.

The public is invited to attend the Annual Meeting and Preservation Recognition Awards at 5 pm at Music Hall at City Hall, 474 Broadway.