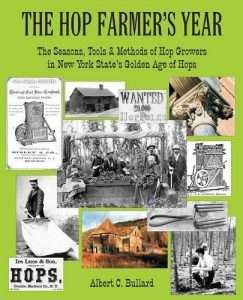 During the nineteenth century, New York State was an agricultural powerhouse that produced almost 90% of the hop crop of the United States. But the dominance of this market, which lasted for nearly six decades, was achieved by vast numbers of small, independent hop growers, for whom hops were only a part of their overall agricultural production.

Bullard will explain the methods, tools, and external factors and mistakes that caused New York to relinquish its leadership in this lucrative, but labor-intensive market.

With the craft beer renaissance in New York now in full swing, the interest in growing hops commercially for craft and farm breweries has surged once again. Al Bullard focuses on the handful of counties in Central New York that were the center of hop culture. Using the farm diary of one successful Upstate farmer, the author provides a guide to the seasonal cycles of running a hop farm. He presents a survey of the unique hop tools used by the growers, and gives insight into how they were used, and at what time of the year. In his book Bullard includes over 200 illustrations supplemented with a brief overview of the styles of hop kilns found in the region.

Bullard will also have his book The Hop Farmer’s Year: The Seasons, Tools, and Methods of Hop Growers in New York State’s Golden Age of Hops available.