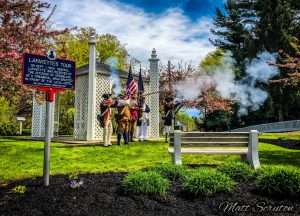 In celebration of the Marquis de Lafayette’s 265th birthday, the William G. Pomeroy Foundation and The Lafayette Trail, Inc. have announced the launch of a new historic marker series commemorating the French General’s involvement and service during the American Revolution.

The markers recognize significant historical events associated with Lafayette, who served as general under George Washington, throughout the Revolutionary War period. This new marker series is part of the current Lafayette Trail marker program established in partnership between the Pomeroy Foundation and The Lafayette Trail, Inc. to mark important sites visited by Lafayette during his 1824-1825 U.S. tour.

The Pomeroy Foundation is a philanthropic organization based in Syracuse. One of the Foundation’s main initiatives is to help people celebrate their community’s history. Since 2005, the Foundation has awarded nearly 1,900 fully funded grants for roadside markers and bronze plaques in 46 states and Washington, DC.  The Pomeroy Foundation has already committed to funding up to 175 historic markers along the Lafayette Trail to honor the significance of Lafayette’s Farewell Tour. Up to 50 markers will now be authorized as part of the new Lafayette American Revolution series.

Historic markers in the new series will feature a red circular logo depicting Lafayette along with the phrase, “The American Revolution.” The current Lafayette Trail markers have a blue circular logo that depicts Lafayette and states, “Mapping the Farewell Tour.” Similar to the current markers, the new marker series will feature a blue background and white lettering. The first Lafayette Trail markers in the new series are expected to be installed and dedicated in 2023.

To learn more about the Pomeroy Foundation’s partnerships and signature marker grant programs, visit their website.