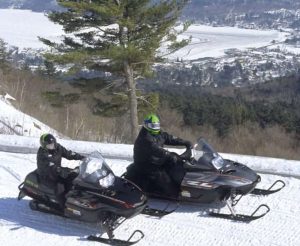 “McLain allegedly took advantage of his volunteer position and the citizens of Lake Luzerne’s trust to line his own pockets at the expense of valued community services,” DiNapoli said.

Prosecutors say that money that was intended for operating and maintaining public snowmobile trails throughout the county was instead pocketed by McLain who wrote checks to himself and to cash. They say he used SWSC money to pay for Lions Club expenses, paid his personal credit card balances in-full and was paid twice for the same reimbursements.

McLain allegedly falsified claims to state and local agencies for club funding and misrepresented SWSC’s financial condition to make it appear the club had a financial need. He allegedly falsified reimbursement claims to Parks, Recreation and Historic Preservation’s “Snowmobile Trail Grant Program” and submitted duplicate claims for expenses that were actually for the Lions Club, not the snowmobile club.

McClain, now of Lancaster, South Carolina, was arraigned in Warren County by Judge Michael Muller and is due back in Luzerne Town Court on November 19, 2022.

The charges filed in this case are merely accusations and the defendant is presumed innocent unless and until proven guilty in a court of law.