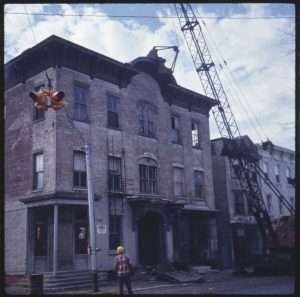 Urban renewal transformed the city of Hudson. Front Street and the blocks between Columbia and State Street, west of Second Street. Franklin Square, Chapel Street, Fleet Street and Market Place were erased from the network of city streets.

Approximately 176 buildings in all were demolished, requiring the relocation of about 850 people. Demolition and the subsequent new construction took place between 1970 and 1972.

The Hudson Area Library History Room will host a Local History Talk on the 15th anniversary of urban renewal in Hudson on Thursday, September 22nd.

Ted Hilscher, Professor Emeritus of History at Columbia-Greene Community College, will show and discuss approximately fifty photographs of buildings no longer standing and streetscapes no longer existing. These photographs have been made available for the first time since they were taken through a collaborative effort by the late Arthur Koweek, longtime Hudson Planning Commission Chair, and the Columbia-Greene Community College Library.

Hilscher will then facilitate a discussion of the legacy of urban renewal in Hudson. Anyone with recollections of the impacted areas of the city prior to urban renewal is encouraged to attend, as well as those who wish to talk about how Hudson and its residents were impacted.

In addition to his professorship at Columbia-Greene Community College, Ted Hilscher is a graduate of Hudson High School, has a Bachelor’s Degree in American Studies from Fordham, a Master’s in US History from SUNY Albany, a Law Degree from Albany Law School, and a law practice with his wife in Catskill.

Photo: demolition of a building at Warren and South First Streets in Hudson during urban renewal provided.